I discovered at breakfast that Victor was very ill - with sickness, diarrhea and feeling terrible. It turned out that he had caught the highly contagious Norovirus - otherwise known as the "winter vomiting bug".  We believe he caught the bug before he left the UK - the reason we know that is that I also caught the virus from him but it did not materialise until I was back home - four days after Victor had identical symptoms to me. Then four days after I caught it my XYL Judy caught it - and we would not wish this horrible virus on anybody. It takes between two and five days to recover if you catch it.

Our plan on day four was to leave the hotel in Namest nad Oslavou early - we had no choice in that as the hotel and adjacent road leading down to the town would be closed at 7.00am for the annual motorsport hill climb event held there. Victor was unable to eat - a situation that lasted for the rest of the day.

Today was the only day that I was to drive - at least for the part of the day when Victor felt at his worst. He was feeling so bad that he was only be able to operate, albeit uncomfortably, on four out of the seven summits I visited.  We planned to drive from Namest to our second hotel 40 Km north east of there, at Novi Veseli. As we travelled we intended stopping off and activating the seven hills around Trebic as this map shows, VY-049>VY-042>VY-030>VY-020>VY-065>VY-036>VY067:

At this point I must acknowledge the usefulness of the SOTA Mapping Project provided by Rob DM1CM. Without this resource and tools and the SOTA Database managed by Andy MM0FMF, we would not be able to plan tours such as this one. In particular tthis days tour was copied from a similar activation day by Jirka OK2BDF which Jirka completed on 4th July 2016 - thank you for the idea and inspiration Jirka!


With great difficulty Victor was able to pack up his gear and drive the car, at least initially. Our first summit VY-049, was near Klucov with the road going into the 25m drop activation zone. I set up my station, and as it was 0530z I made just five contacts on the 40m band in less than 15 minutes. The hard part was now persuading Victor that he needed to get out of the car and take over sending the Morse. I moved the dipole links on to the 30m band and in 3 minutes the ailing ham captured contacts with SOTA regulars ON4FI, OK2PDT, G3RMD and EA1CS. We went QRT immediately and made our way by car the short distance to OK/VY-042 west of Trebic. I did persuade Victor to exit the car and walk the short distance to the station in the woods on Zadni hora VY-042: 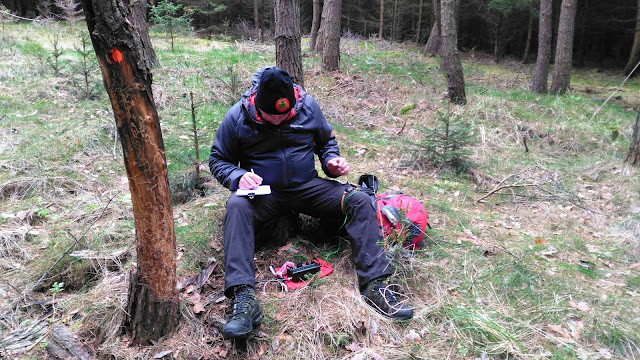 Amazingly the Northern Irishman made 16 contacts in 12 minutes on the 30m band on VY-042 to seal it. However, he wasn't up to driving after that so I took over at the wheel and we made our way to a common parking place for VY-030 and VY-020. Sadly Victor wasn't up to even getting out of the car on these two summits and left it to me to activate them both solo. The summit of Mareka VY-020 was the more interesting out of the two summits. There was an impressive EEC funded viewing platform on the top. I could have operated from there but decided to stay at ground level, where as well as operating spoke to some locals who were out walking as to what I was doing with my radio. 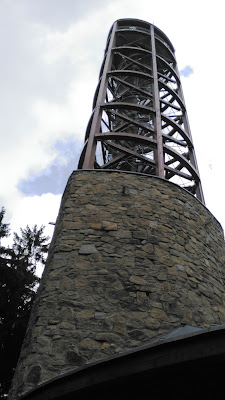 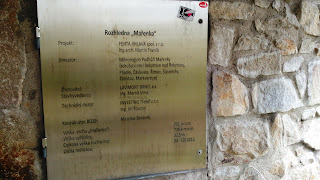 By Czech standards the walk to VY-020 was a longish one at 2.2 Km. The route I used on forestry roads is now available as a GPX file in the track section of the SMP.  A few hours rest in the car meant Victor felt a little better and he was able to drive us to Kobyla Hlava VY-065, however he still wasn't up to operating so remained in the vehicle while I walked the 400m to reach the 680m contour in the woodland where I set up my station to make 13 contacts. We moved on to VY-036 and finally VY-067 where he felt able to operate as they were both virtually "drive on" summits. Here he is suffering on Salatav kopec VY-067: 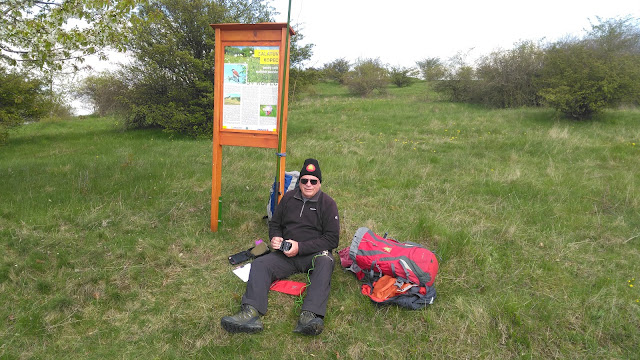