On Thursday 27th April the weather forecast was pretty good. I left my home in Pickering at 5.50am making for the Lanark area in Scotland so as to visit and activate the summit of Tinto (Ref GM/SS-064) for SOTA. After a problem free drive with one stop I was walking by 9.20am from Wiston Lodge - my approach to Tinto would be from the south via Pap Crag. This was a good place to park the car with others, parked at the educational establishment there.

A GPX file of the walk can be found in the SOTA Mapping Project tracks section. Here is my route:

The days activations were to be a proving ground for my radio gear - the next week I was heading to the Czech Republic for a 5 day SOTA Tour with GI4ONL. On arrival I made just two contacts with MM0GOR and GM0GAV on 2m FM using a handheld and RH770 whip before erecting the HF bands linked dipole.  I was using my Elecraft KX2 with the built on KXPD2 key. Within 10 minutes of starting up on 40m CW I had a problem - the KXPD2 key started to fall to pieces and I couldn't send dashes!  The key has made less than 500 QSOs. On inspection I found the terminal posts for both contacts had worked lose. I had no screwdriver to tighten the small crosshead screws, however I did have the small allen key for adjusting the contacts and this served as a makeshift screwdriver for tightening the screws enough to complete the aborted contact I had with John G4RGV! Apologies to the previous stations worked for the sending errors I made prior to realising what was wrong. Continuing on with the operation I worked summit to summit on 20m with Juerg CT7/HB9BIN/P on CT/AL-003 in Algarve and after switching to SSB I was called by Stavros SV2RUJ/P on SV/MC-005 in Greece.

Returning to the car for some lunch I then headed across the valley towards nearby Lamington Hill GM/SS-172, whilst making a mental note to obtain some loctite for those small screws when I returned home..... The issue was later reported to Elecraft so they can ensure that locking compound will be used in future on their paddle keys.

Like previous activators I used the car park on the other side of the A702 to start the walk to Lamington Hill. Before setting off I removed the 2m handheld and whip from my rucksack. In doing that by mistake, I also removed the bag containing the HF dipole - only realising my mistake when I reached the summit 40 minutes later! So this was a none SOTA visit to Lamington Fell. I thought the rucksack felt light....

Returning to the car with one local summit left to climb, Dungavel Hill SS-165, I started thinking.... Either I could return to the car, collect the dipole and walk back up Lamington Hill or instead immediately go to Dungavel Hill and then head south to the relocated G/LD-059 Muncaster Fell on my way home - and that is what I decided to do.


If you read my previous blog you will have realised that Muncaster Fell was troubling me. Its relocation meant that I could no longer say that I had SOTA Completed all 175 SOTA Marilyn summits as an activator and chaser. I believe that I am still the only SOTA activator and chaser to have achieved this. My status needed to be restored which is why this awkwardly positioned summit needed to be activated by G4OBK...

There was a tallish narrow protruding rock about 5m down from the highest point at the new location and I managed to tie my 5m pole to this and make a handful of contacts. As I have found in the past in SOTA once you get beyond evening dinner time there is a shortage of chasers hunting for contacts: 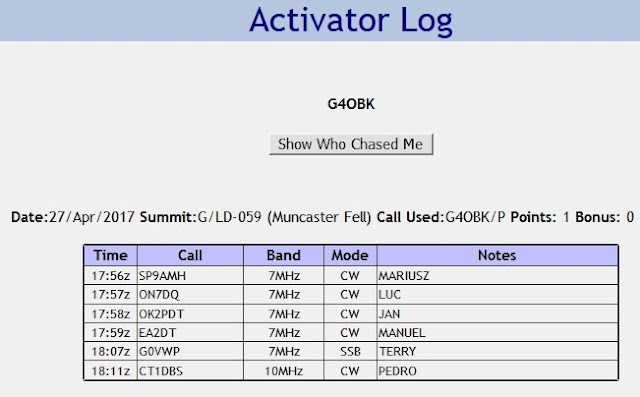 These are all great guys these chasers. I have met most of them in person apart from Manuel EA2DT and Mariusz SP9AMH. Thank you Mariusz, Luc, Jan, Manuel, Terry and Pedro for making my day.

I had a 30 minute fast food stop at the A59 Burger King near Skipton on the way home and arrived back home in North Yorkshire at 11.40pm, making this an 18 hour day with 472 miles driven. The distance walked was 11 miles and the total ascent on foot was 3400 feet.
Posted by Phil G4OBK at 23:59