There still remains a number of Scottish Border summits that are reachable from my home in North Yorkshire - providing that I am prepared to drive up to 400 miles in the day and be away from home for around 16 hours. Today I was able to finish off three summits for SOTA Complete using the HF bands and 2m FM.

After leaving Pickering at 5.50am I reached the cattle grid on the B709 road that lies between The Wiss and Turner Cleuch Law, both two point SOTA summits, at 9.30am. I was accompanied by my Border / Lakeland Cross Terrier Treacle once again, and we stopped en-route at the Southwaite Services near Carlisle for a comfort break.

Setting out at 9.48am this was a straighforward trek to the summit. No section was particulary steep but there were a few broken fences for us to negotiate. The summit trig point was reached within 42 minutes. The GPX track I used can be downloaded (as all my tracks can) from the SOTA Mapping Project run by Rob DM1CM.
Using a 5m HD travel pole and link dipole for 40/30/20m I set up my recently acquired Elecraft KX2 transceiver and a Yaesu VX-170 handheld on an extended RH770 whip. After testing out the KX2 on my recent SOTA Cycling visit to Gisborough Moor I had realigned the display which was now accurate and I had constructed and installed an internal battery pack.  The first contact on 40m CW was a super summit to summit QSO to Norway with Aage LA1ENA/P on LA/TM-134. I finished with 24 contacts on HF before turning my attentions to 2m FM where I was called by my friends Nick G4OOE/P and Dave G3TQQ/P who were on Helvellyn G/LD-003.

My experiences with the new KX2 so far and throughout the day using just the internal battery are detailed at the end of this blog....

Arriving back at the car via the same route taken on the way up, I had my dinner and a short break before setting out refreshed for SS-140 Turner Cleuch Law.

This was a shorter but steeper walk of just over 1 Km which was completed in 23 minutes. Keep climbing as you pass this fine cairn part way up the hill: 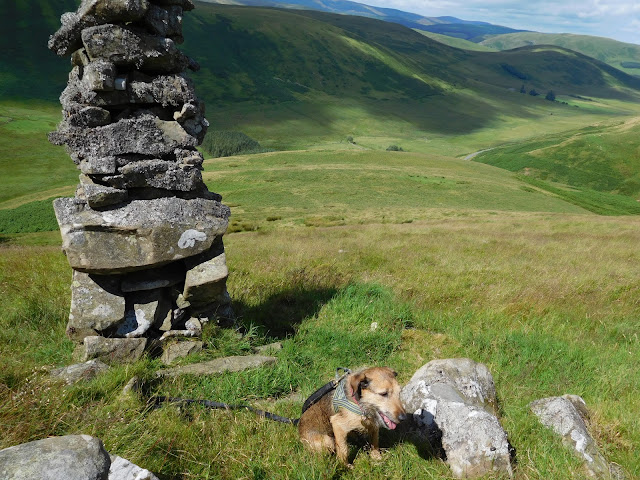 There was no trig point to support the pole this time but the fence running across the top did the job instead.
On my arrival the 2m FM radio opened up its squelch with a calls from G4OOE/P and G3TQQ/P who were now on the flank of Helvellyn descending back to Wythburn car park. Geoff G4WHA/M was then worked on his lunch break and on a hilltop close to Penrith. Not only that, but HF was in better order and 37 contacts were completed in CW and SSB in 42 minutes.  I was delighted with that as I packed up and made my way back down to the car.

Less than three miles south east of SS-140 lies Cacra Hill, which was easily reached via the B709 and B711 roads. My plan was to park near the cattle grid at Cacra Cottage and climb the hill from there. As I was starting out the farmer from the cottage spotted me and advised me that if I went that way I would encounter his bull. He helpfully suggested that I continue to NT 3130 1675 where I could park and climb the fell from there. Pictured is the route I took and the parking place used on grass beside the single track road: 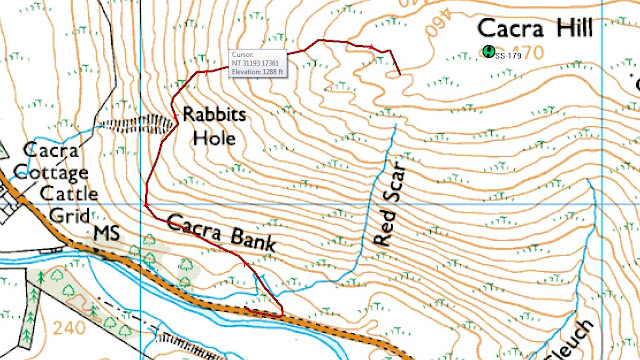 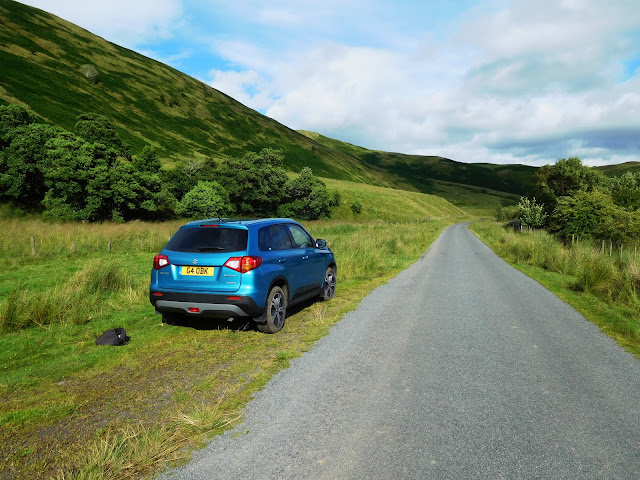 The route across Cacra Bank was reasonable, with a fair amount of bracken to push through and some animal tracks to follow. I decided to top out at the 460m level where there was a rocky outcrop. This was well within the activation zone on the grass topped and almost featureless summit, which took me 30 minutes to reach.

As the day went on the skip distance on the 7 MHz / 40m band had shortened, with my first contact being with my friend Victor GI4ONL in Bushmills, Northern Ireland, followed by Jeff G4ELZ in Devon. At 4.50pm I closed down the station on HF. A few fruitless calls on 2m FM were tried but there were no takers.  Heading back down the hill I came across this VHF FM broadcast band halo antenna, located around 700m from Cacra Cottage. The feeder was the same diameter as RG-213 coax, and I wondered what the feeder loss would be: 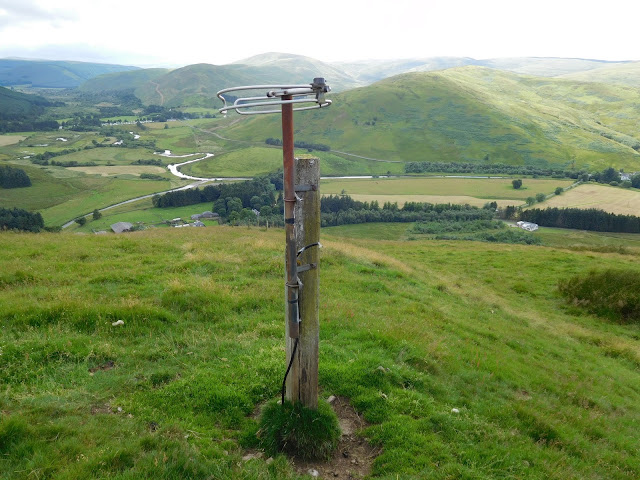 My route back to the M6 at Carlisle took me via the B711 to join the A7 near Hawick. From there I went south west via Teviotdale to Langholm. The road becoming familiar to me once I reached the Mosspaul Hotel which I had visited in June when activating Ellson Fell GM/SS-146 from there.  At 19.15pm I reached the KFC at Penrith for my usual feast of 3 pieces of Colonel Sanders chicken with chips and cola (go large of course).  I made it back home in Pickering at 21.50pm, tired but pleased with three more SOTA Complete summits logged.

Supplementary report on the Elecraft KX2:


Last month I visited the Ham Radio Fair at Friedrichshafen and spent some time on the Elecraft stand talking to Eric WA6HHQ (Elecraft Co-Owner) who demonstrated the KX2 to me and allowed me to handle it. I also attended Eric's presentation on Elecraft as part of the SOTA Presentation organised by the HB9 SOTA Group.

I came away from the event having decided to buy a KX2. I have used various transceivers for SOTA activating in the outdoors since I started doing it in 2005.


After the Brexit vote in late June when the UK £ fell by almost 10% and stayed at that level, it seemed a good time to buy the KX2 in case the price increased, so I ordered one from W&S the day after I got back to UK from Germany and received S/No. 194 the following day.  I am now awaiting the KXPD2 paddle key which is back order from W&S. Unfortunately I do not know when these will arrive in UK. I still have my Yaesu FT-857 to provide extra grunt when needed, my Youkits HB1B is my back up radio. I sold my LNR MTR3B and Yaesu FT-817ND now that I have the KX2.

So - how have I found the KX2 so far? Great - once I got it to work!  When I received my KX2 it had no transmit and no receive. On inspection the small plug connecting the BNC socket to the PCB had worked its own way out in transit. Easily fixed...

RTFM - Yes, essential. This is not like a typical Japanese transceiver, but once you get the hang of the multi function buttons and controls it's all fine, but I'm still learning - I've never used a piece of Elecraft equipment before so practice is still needed to become fully adept in the transceivers use...

I bought the larger Lowepro CS60 bag from one of the famous internet shops on line - a nice fit for the KX2 and bits and pieces. I bought a €5 Labtec headset / boom mic at Friedrichshafen. That headset seems to work very well and I am getting good reports on my audio quality, but I need to install a PTT switch in line, rather than using the XMIT switch on the radio. I have also had QSOs using the internal microphone which seems to be quite satisfactory.

On my first SOTA trip with the KX2 last week I used an external LiFePo4 battery. I have now built myself an internal battery pack which worked well on the SOTA trip I made to Scotland when I activated GM/SS-122, SS-140 and SS-179 on 27th July. The battery pack cost me £20 to make up. I used 3 X Sanyo 18650 3 AH tagged cells, a BMS battery protection board, shrink sleeving, wire and a DC barrel plug. The pack is a snug fit inside my radio. I bought a 12.6V protected charger for charging the battery pack. The battery needs to be removed from the KX2 to charge which I see as a negative feature, but Elecraft presumably see a fire risk if the Lithium battery pack is charged internally.


Using the current and voltage monitoring features built into the KX2 I made some observations whilst operating yesterday. I was on the air from three summit locations, and completed 81 contacts in CW and SSB on 20m, 30m and 40m using a link dipole at 5m AGL. I do not use an ATU. These were typical rubber stamp contacts. I was actually on air, receive and transmit for a total of 132 minutes. The internal battery voltage at the start of my activity was 12.3V. At the end the battery voltage was 11.1V - as it should be, with the voltage on load showing 10.2V with the KX2 still indicating 10 watt output on the display using the TUNE button. The total power consumption for the whole activity was 1068 mAh. Therefore my internal battery should actually be less than 50% exhausted - amazing!

The only other thing I would note is that the radio was slightly off alignment by around 250 Hz when I received it. This was easily corrected using the calibration procedure detailed on page 37 of the manual. I have also preformed the latest firmware update as per the manual and the useful tips that Bob W3FPR put on the Yahoo Group a few weeks ago.

The features I like on the radio compared to the FT-817 are the lighter weight, size, clear display in sunlight, the smooth full break in on CW, the memory keyer, internal battery capacity and roven power usage allowing at least five average HF SOTA activations from the internal battery, the superior receiver performance and a modest increase in output power. Having now bought the KXPD2 paddle key I find that really useful... All I do when I arrive on a summit is plug in the antenna and make contacts - no power lead or external keyer to connect. I'm hoping to purchase the KX2 protective end panels from GEM products when they become available in the UK as the price of shipping them in individually from the USA is prohibitive.
Posted by Phil G4OBK at 23:59