This was the morning when I lost my passport in Bastogne....


The previous evening we had met up with Peter ON4UP and Franz ON9CBQ in a restaurant in Bastogne adjoining our accommodation. After a few beers I had left the meeting to check in at the reception at the Hotel Giorgi around the corner.... This is where I had presented my passport to the receptionist, and that was the last I saw of it, it seemed. I woke up the next morning to find it was not in my trouser pocket where it normally stays on these trips! Panic set in as I thought we would need to spend the day driving to Brussels to obtain a temporary passport. Calming down I retreated my steps from the previous evening in the reception area, and in the adjoining street - without finding the passport. The reception was unmanned and it occurred to me that I had better check under the all in one printer/scanner cover behind the desk. I lifted the top of the unit and there was my passport! Sigh of relief and we got on with our breakfast...

Leaving the square early in Bastogne in fair weather we made our way north, stopping off on a summit we had visited before on our trip to Friedrichshafen in June 2014 - this was ON-010 Baraque Fraiture. It would have been wasteful to pass by without snatching the eight points on offer even though it was not a unique summit for either of us. Summit details are here from our previous activation. I took a turn on the 40m band here for a change and logged 37 stations in 20 minutes, of which 20 were in the UK - all on phone. ON-010 is activated regularly owing to its easy to reach location by car - as a SOTA Chaser I have had 21 contacts with ON-010!

Less than an hour after leaving Baraque Fraiture we arrived via an asphalt road at a good clear parking place above Weris for ON-018 A la Plate. An easy walk of 10 minutes on a track took us to the highest point and we set up amongst some saplings in the woods.

Reverting back to our normal practice of Nick using 40m and me using 20m and 30m I was on the air for less than 30 minutes before packing up to head for Bois de Tour de Coo ON-024.

This was one of the trickiest to find paths on our Benelux Tour. The summit is above a permanent rural funpark with rides with such names as the Mega Mindy Flyer! We parked in a cemetery car park just off a road called Grand Coo and after a false start when we went off in the wrong direction, we walked west along the road from the cemetery and found a path going up the steep bank on the left which wound its way to the summit track.

There is a less steep but longer way up, but this path suited our needs and it only took us 15 minutes to reach the highest point. Here is my track ouline as loaded into the SOTA Mapping Project: 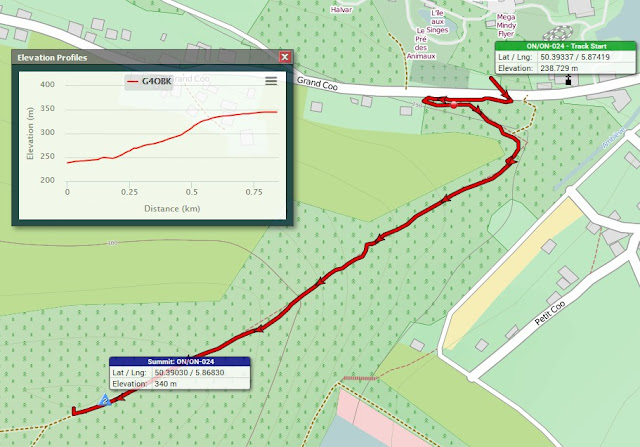 There were a few walkers passing by on the recently gravelled track adjacent to where we set up our stations: 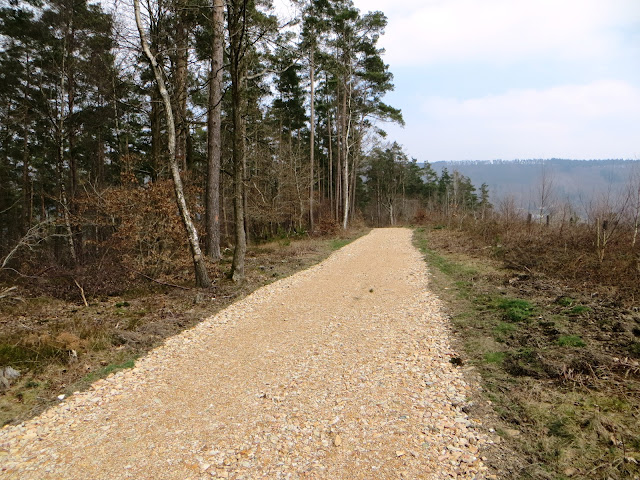 In the middle of the day radio conditions were not so good and I was operating for 25 minutes before we packed up to head for our next Belgian summit.

How close can you get to the summit in the car? Often the question is unanswered until you get into the vicinity....

It took well under an hour to drive from the cemetery at ON-024 to reach the top of ON-025. We drove up an asphalt farm track and parked almost on the summit. Passing farmers in their tractors towing slurry tanks were disinterested and gave us a wave as they went by our stations on the summit, and the smell wasn't so bad either: 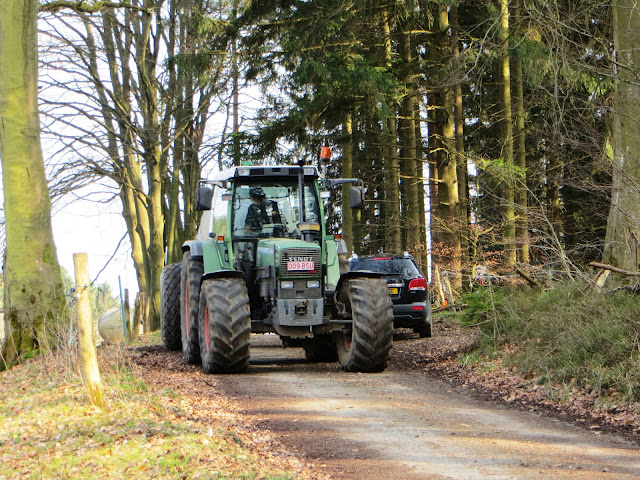 We were on the edge of a private wood where the summit is inside but the track which we set up alongside of the wood was well inside the activation zone at 10m down from the highest point. I logged 34 stations in 20 minutes on 20m and 30m, with my final contact being on 40m SSB using Nick's radio, when we both worked our friend in Malvern, Geoff 2E0NON. Time to move on then and do our last summit of the day which I activated in 2009.  We drove through the town of Malmedy to the highest point in Belgium - Signal de Botrange ON-001.

ON/ON-001 Signal de Botrange
When I came here in June 2009 I was bitten badly by the small black flies, but in March 2015 this was not a problem. We walked down from the main road on the opposite side to the restaurant and tower and set up both stations on and next to the wildlife viewing platform. As usual Nick went on 40m and I used the 30m and 20m bands completing 42 contacts.

Job done we headed off to the large town of Verviers, where we stayed for one night only at the Hotel Van der Valk. This was a large corporate style hotel which was formerly a large railway warehouse: 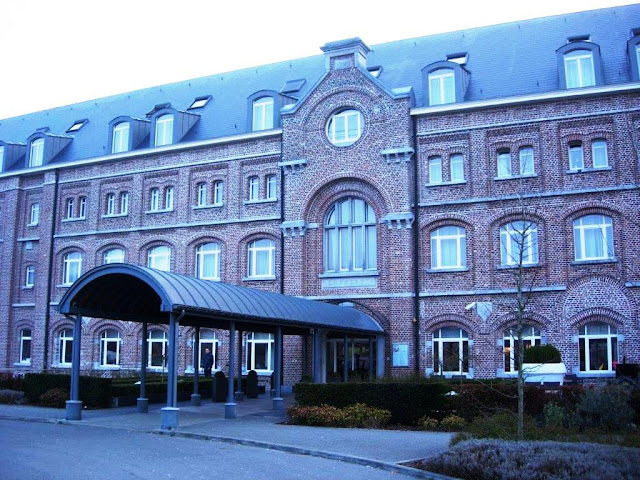 We walked into the town but struggled to find somewhere to eat. Eventually we came across a nice looking bar for some more Belgian beer and a steak and chips meal.  The following day we were hoping to complete activating all Belgian summits before heading into the Netherlands to finish those off as well...
Posted by Phil G4OBK at 23:59