I organised a trip to the Benelux Countries with my friend Nick G4OOE with the intention of completing activation's of all Belgian and Luxembourg Summits. I was the navigator and Nick was the driver of his Kia Sorrento registration no. G4 OOE, and this is the story of how we did it...

To complete the list of summits I had on my list meant we needed to be away for five full days. P&O Ferries operate a daily service from Hull in East Yorkshire to two ports in Netherlands with sleeper berths and car ferry included in the price. We missed the SOTA winter bonus period by two weeks, but the price was right - the costs of the crossing escalate once Easter week is reached. The boat leaves Hull early evening time and to maximise the time available on Day 1 we chose the crossing to Zeebrugge rather than Europoort (Rotterdam). Our ship was the Pride of York, an old boat which was not so comfortable and with less facilities than the boat we returned on five days later from Europoort. We had a quiet night with little to drink and disembarked around 9.00am into the Belgian Port. Our first stop was an amateur football pitch on the top of a summit plateau east of the town of Ronse.

It was a grey day in Belgium as we pitched up our separate stations on the "drive on" summit, the two station arrangement being a trend we continued throughout our tour. We had two problems on Pottelberg, it started to rain and a nice man arrived to white line the pitch for the game later that day! The rain forced me and Nick to QRT early and that saved the radio getting limed on, as I set up in the goalmouth of the pitch, using the goalpost as a support for my pole. The groundsman was a cheerful fellow, intent on repeating how enjoyable Belgian Beer was with hand movements with his drinking arm. I already knew Belgian Beer was good and agreed!

As the groundsman drew close and the rain started I saw Nick was already dismantling his station at the other end of the pitch and after working down 30m CW until nothing was left I also shut down.

The area we were in is known as the land of the valleys and no sooner had we left the car at the border post separating the Belgian from the French side when the voice of Christophe ON6ZQ came crackling through on the 2m FM handheld I was listening on. Our pre-aranged meet up had worked and he was on his way! A 2m FM Chaser point was given to Christophe who was some miles away, then and I continued setting up my station on the Belgian side of the barrier.

Nick was around 150m away from me setting up his station on the French side NO-047, which was well within the 25m drop zone of the actual highest point of the French summit.

Get them while you can... This summit will soon be morphed into one and become a singleton SOTA rather than a dual. I've activated a few dual SOTAs before on the German - Austrian border, they will soon no longer exist....


Christophe ON6ZQ appeared for the summit handshake, bearing a gift for the two G stations - a box of fine Belgian Chocs!  Lovely, we had two each night and saved the XYL the rest for when we got home. Thank you very much Christophe - for your most generous gift.

We had a good chat and as Christophe departed we finished off the activation as it approached dusk and then we drove the car around the corner of the wood to the summit tower structure - wow that was something else. It was too late in the day to climb as the access gate was locked. Most impressive: 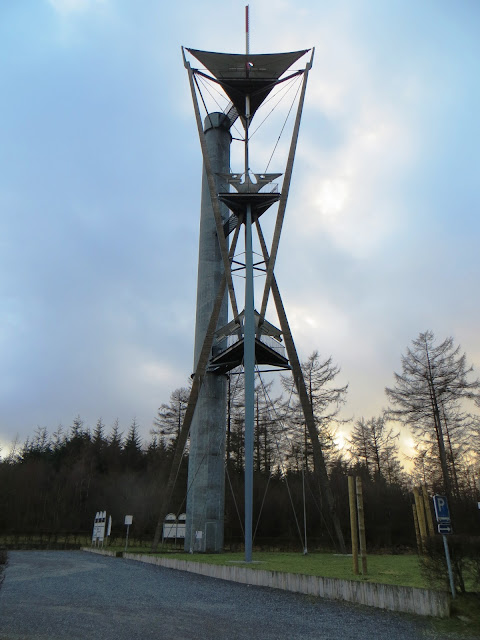 We were booked into a hotel in Rochefort called Le Vieuw Logis. This was in a historical part of french speaking Belgium. We both agreed that despite the hotel being the most expensive of the places we stayed in we liked it the least. Arriving in the dark meant we couldn't see where we where and the check in was impersonal and not helped by the language barrier. I was surprised to find that my few words of french where more than the french lady owner had in English, now that is rare! We are such a lazy race when it comes to learning a second language.... I just have a little school French but I never took the exam preferring as a choice Geography instead...

After checking in we ventured into town and found a Fritterie, where good food was quickly served with a few beers, just what we needed. It had been a good first day with no problems. I thought conditions were down on 20 meters. Tomorrow we had another social gathering at our finish hotel in Bastogne, with Peter ON4UP - Belgium's SOTA Association Manager and his and our friend Franz, ON9CBQ. This was more of a reunion than a straight meeting as we met up with Peter and Franz in June 2014 when we had a joint Belgian - English activation of the 8 point summit of ON-010 Baraque Fraiture.