The walk to the highest point on Madeira turned into a much easier affair than we expected when we arrived at the start of the walk and found that the path to the summit was paved virtually all the way to the top. 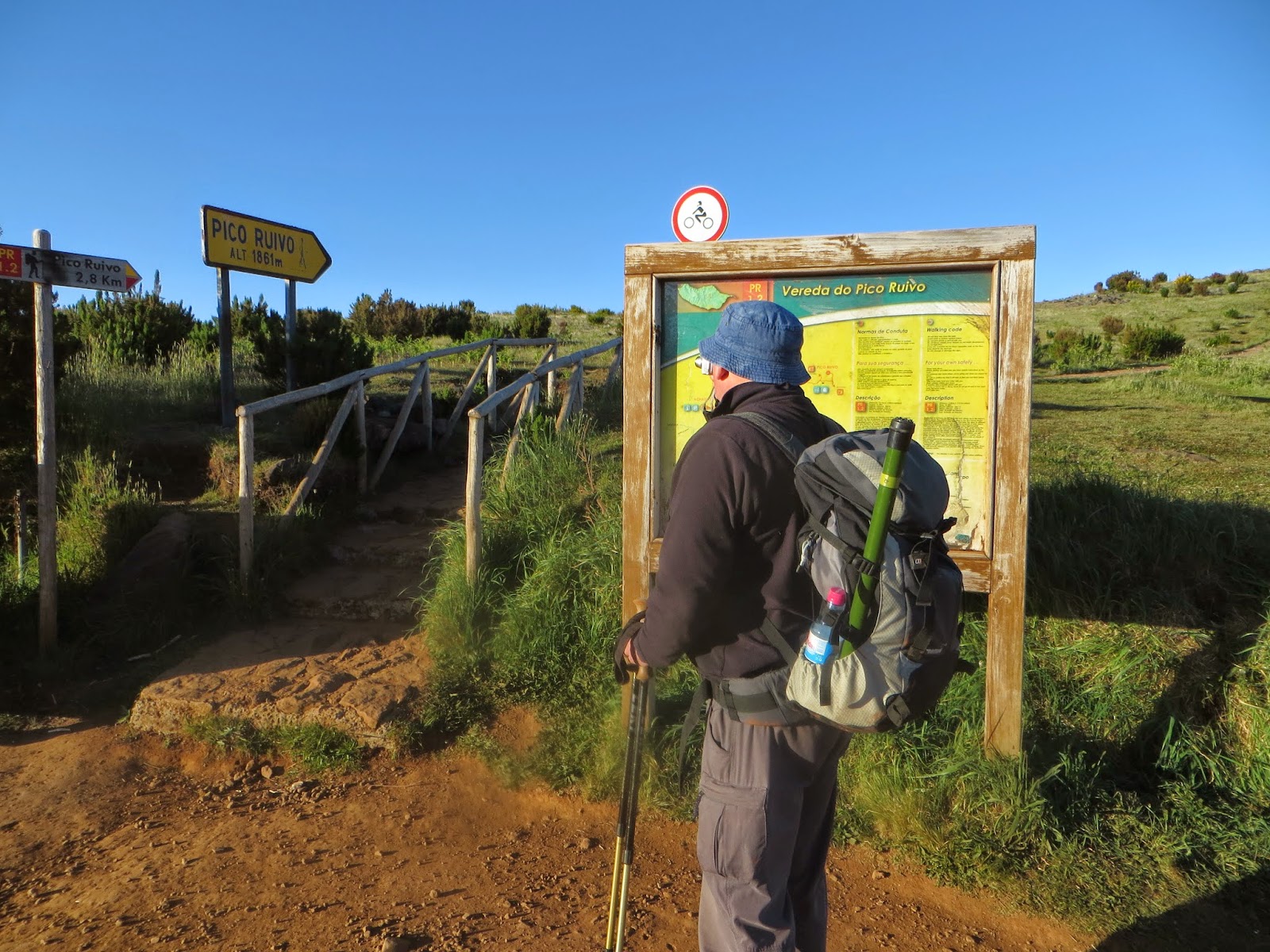 A mountain house and shop (built in 1939) lies quite close to the top around 80m below the summit. This facility caters for the many tourists and hikers who visit there on a daily basis. I believe we were the first on the mountain that day and we had it all to ourselves on our arrival.

Once again we had an early breakfast at 6.00 am in Nick's room at the Regency Cliff Hotel. This saved disturbing my XYL Judy who needs more sleep than I do... We headed off from the hotel in the Renault Clio at 6.40 am and arrived in the empty car park for MI-001 at 8.00 am. It was a bright clear morning with thick cloud below us. The road up to Achada Do Teixeira was good apart from in one place where there was a pothole the size of a car, but this was safely negotiated with care.

We set out on our walk and passed three stone and slate shelters before we reached the mountain house and shop. This was closed when we arrived at 8.45 am. The duration of the walk from car park to summit was 53 minutes over a distance of 2.7 Km.

The summit top is a paved walkway - we used our hands a few times to climb onto the top walkway, however this could hardly be called a scramble. I set up my station to the north end off the fenced walkway, and using the fence to support the pole. Nick did the same on the opposite end of the top near to the very large trig point. We had no problems with interaction and kept in touch via handheld VX-170 radio's.

Conditions were excellent for low power operation - we were both using FT-817 transceivers and between us completed 104 contacts in little more than an hour. I carried on where I left off the previous day with operation on 18 and 21 MHz in CW/SSB. Nick started on 10 MHz CW and when that dried up moved up to 14 MHz in CW and SSB. Best DX for Nick was VK2IO (New South Wales, Australia) in CW.  I went for quantity rather than quality and failed to make a single contact outside of Europe! I had turned on data roaming on my mobile phone which helped when I moved frequency when I used the excellent free Android App called Rucksack Radio Tool (Thank you DL1DLF). Nick continued to utilise the dial a spot service provided by Roy G4SSH who lives near to Nick in Scarborough, North East England.

Within an hour of arriving groups of walkers and individual hikers started to arrive, including many of french nationality. We packed our gear up after a 90 minute stay and headed back to the car park passing many tourists on the path without rucksacks and wearing trainers. To be truthful this would not be a problem on a day like we had with such settled weather. The path was paved, there were shelters, there was a shop near the summit where drinks an snacks could be purchased and there was a restaurant open for business when you returned to the car park!

Indeed, when we returned there were coaches, minibuses and tens of cars on the car park.

After our pack up lunch we drove back down towards Santana and on to our final SOTA activation in Madeira on this trip - the Pico do Areiro CT3/MI-004, an eight point summit, where you were able to drive into the activation zone.  Link to CT3/MI-004
Posted by Phil G4OBK at 07:00