As I left Pickering at 5.50am bound for the Forest of Bowland, I knew I would be facing a damp day ahead. However I set off with enthusiasm in the knowledge that my friends Geoff M6PYG and Nick G4OOE that same day would also be out climbing Grizedale Pike and other Wainwright Fells on the Coledale Horseshoe near Keswick. The chance of making some radio contacts with them was spurring me on.  I chose the shortest route via Sutton Bank, A59 Skipton by-pass, Gisburn and Dunsop Bridge on my outward journey. This brought me to Jubilee Tower which was at the start of my solo walk up to Ward's Stone, the highest point in the Forest of Bowland. I was walking at exactly 8.30am local time.
So what makes Ward's Stone the least activated of the South Pennines 16 summits? Accessibility and the distance you need to walk to reach the two point summit.

This is why I saved Ward's Stone until it was my last South Pennine summit to climb and activate. As it was my last SP I wanted to do the summit justice despite the weather, so I armed myself with HF gear and my usual Yaesu VX-170 FM handheld transceiver and vertical dipole. The HF transceiver is nothing special - it is light and low power and only operates on CW (Morse). This is the YouKIts HB1B radio which produces about 4.5 watts RF output from internal batteries:

The walk up is on access land - I noted the signs which say NO DOGS. I was glad I hadn't brought mine today, much to her chagrin.

The moor looked well managed once you reached Shooters Pile and many grouse were disturbed by my presence as I ploughed my way through the bogs in mist and rain. There would not be any shooters out today however - it was too misty and wet.

Go through the gate in the right hand corner of the large car park at Jubilee tower and follow the fence to your left for 1.4 miles. It is boggy but there is evidence of the passage of hiking boots. You pass a couple of landmarks on the way. The boundary stone at SD 5491 5808: 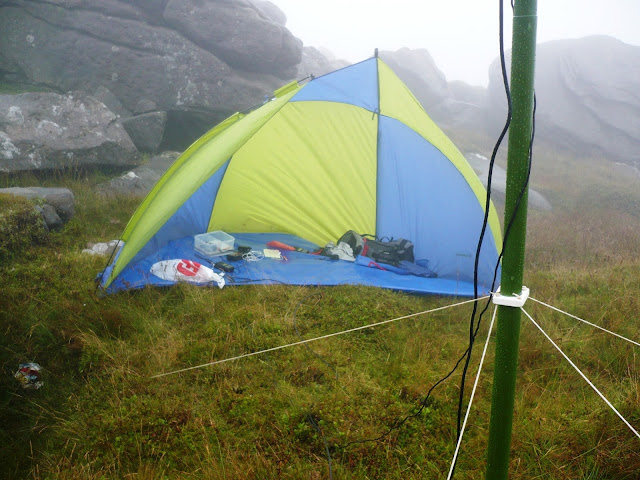 My shelter was first erected and then the antennae followed. I use a 6m telescoping 6m fibreglass flag pole to support a home made link dipole for HF and a vertical dipole for 2m FM.

40 minutes after arriving on the summit I made my first contact, with my friend Colin G4UXH in Milnthorpe on 2m FM. From then on for the next 100 minutes I went from band to band on 40m, 30m, 20m and 2m making contacts. I finished with 32 contacts. Notable ones included:

I hung around waiting for my friends Geoff M6PYG and Nick G4OOE to arrive on Grizedale Pike G/LD-015 whilst I was sending on HF CW, and then I heard Geoff's voice "CQ SOTA CQ WOTA" crackle through on the other VHF radio, so we quickly made contact, this was followed fifteen minutes later with a contact with Nick on his arrival on the summit.

Satisfied, it was now time to pack up and beat a hasty retreat back to the car for the three hour drive home via Bentham, Skipton and Sutton Bank back to Pickering. I stopped off at The Dalesman Cafe in Gargrave for two Chorley Cakes and a pot of tea, my reward.

Ward's Stone was one awkward place for me to get to, but I'm glad it's now been done and I won't be going back. My plan next is to finish off the Welsh Borders summits in the autumn before concentrating on Wales and Southern England.