We rose at 6.15 am and were in Little's Bakers and Confections in Moffat town centre by 7.00 am buying bacon baps, tea and packed lunches to take on the fells. Little's provide an excellent early morning service for workers and early starters.

The plan for Tuesday was a day fellwalking further north and doing SOTA in the Lowther Hills (known as The Lowthers), which are part of the Southern Uplands. These hills rise to 732m ASL on Green Lowther (GM/SS-056).  Our three target fells today were located at the northern end of the Dalveen Pass, the A702 road which runs from Carronbridge on the A76 Dumfries to Kilmarnock road to the M74 at Elvanfoot. We also wanted to see if Green Lowther could be accessed by car via the private tarmac road to the NATS Radar Station from the B797 at Wanlockhead, if we had time.

From Moffat it was a short drive to the parking place near a mobile phone mast just off the A702 at NS 926084.

We left the car and headed for the summit of Well Hill at 8.25 am, arriving on the top at 9.15 am. An old Roman Road goes to the village of Durisdeer, we followed it for 1 Km until we turned right to follow the moorland ridge along animal and quad tracks. It took us 50 minutes to reach the summit.

Just like the previous days summits near Moffat, SS-112 Well Hill, has a fence running across the top providing us with the support for our 5m pole, link dipole and 2m vertical dipole. I concentrated on 40m and put 24 stations in the logbook in less than half an hour including Paul GM4MD/P on 2m, who was further north, on the summit of Black Mount SS-158. It was purely coincidence that Paul and Gerald G4OIG were in the same SOTA area as we were and workable on 2m FM. I only discovered they were travelling to Scotland the day before we set out. Geoff concentrated on 2m FM and made 8 QSOs including Jack GM4COX/P and Gerald GM4OIG/P who were also on Black Mount.  Top Northern Ireland Chaser Victor GI4ONL, was also logged on the 2m band. We spent less than an hour on the summit and then followed the fence SSE back down to the Roman Road which was crossed on our way to the top of Durisdeer Hill.

Scald Law was crossed next and by following the walls and fences we reached Ballencleuch Law SS-075 90 minutes after leaving Well Hill. The weather was fine and sunny.

55 minutes was spent on SS-075 and we made 36 contacts between us. Our first contact was with our best friend Nick G(W)4OOE/P who we had climbed Pendle Hill with two days previously. Nick was on Snowdon and we worked him on 2m FM over a distance of 157 miles / 253 Km. The mainly sea path must have helped.

I was unsure of our most effective route back to the car but we took a punt by following the Gana Burn down to a sheepfold at NS 921060. I'd feared this would be boggy but this was not the case after a few weeks of dry weather - the route was excellent. I'd held off having my lunch regretting this later as I "blew up" with hunger knock as we neared the car and never recovered fully until we returned to Moffat at the end of the day after our third summit of Hods Hill SS-131.

After a late lunch back the car we drove to the entrance gate to the Daer Reservoir site at NS 972096. From here we tried to follow the Southern Upland Way and this proved difficult at times as the path was not so clear through the long dead grass. For a long distance route this section was obviously rarely walked and appears not to be maintained by the local authority compared with the section we had walked in the Dumfries & Galloway region. As I was feeling quite weak due to allowing my reserves to dwindle, Geoff went ahead and I trudged along reaching the summit in 55 minutes over a distance of 1.9 miles. To our left was the massive Lowther Hills Wind Farm, the largest I have seen: 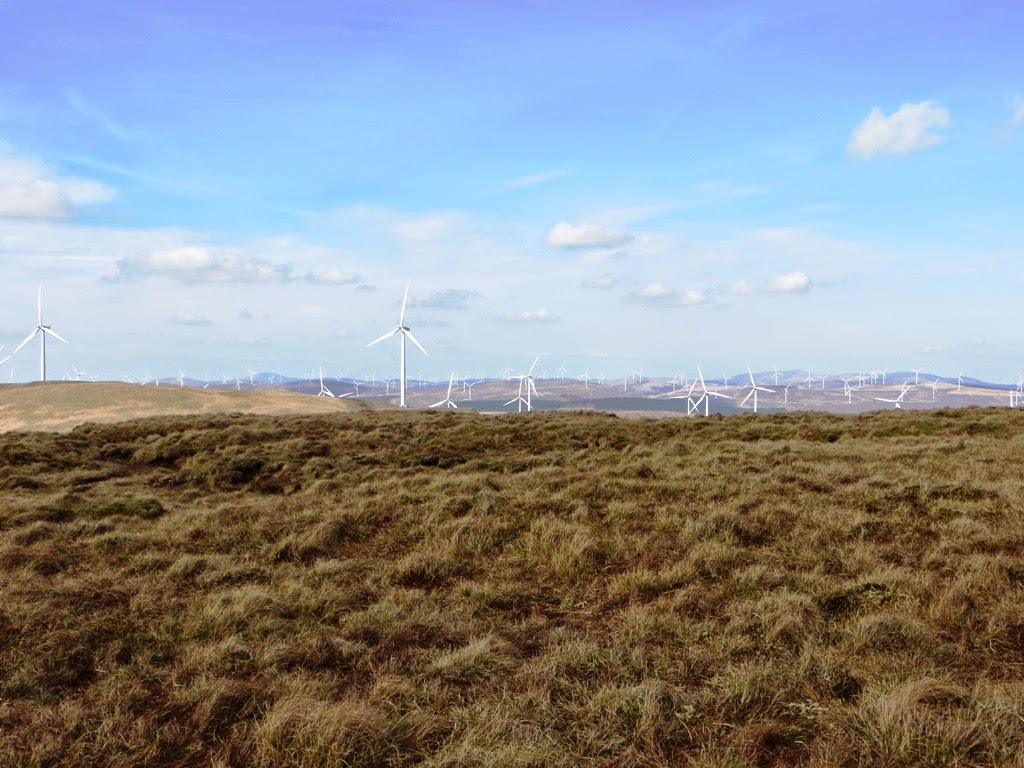 Hods Hill SS-131 has a double elongated top and we set ourselves down at the fence corner on the first high point reached. The SOTA activation zone is around 1 Km in length if you trace the 25m drop zone across the top of the hill.  I started to feel better once we sat down and started operating the radios. Again we remained on the summit for 55 minutes from arrival to departure making 36 QSOs between us on 40m CW/SSB and 2m FM. All three summits were qualified on 2m FM by Geoff running 40 watts from an FT-1500M, and my contacts on 40m were QRP using the FT-817.  We were back at the car at exactly 5.00 pm and on our way see if the tarmac road up to Green Lowther near Wanlockhead (GM/SS-056) was accessible by car. We had no energy left to contemplate climbing it on foot!

We drove back to Elvanfoot and turned left on to the B7040 to Leadhills and Wanlockhead. We reached the gate to the radar station to find it locked - and locked it was, good and proper with ten high security padlocks! 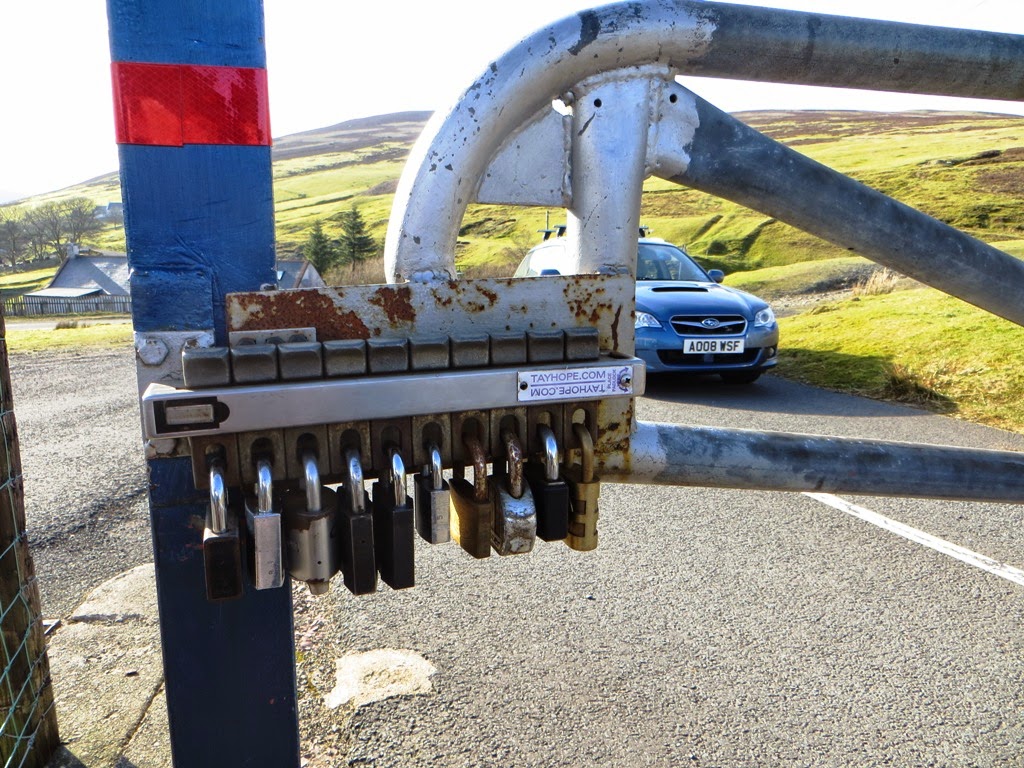 With no energy and time left to physically climb up Green Lowther (a round trip off almost 7 miles and 1300ft ascent) we turned round and headed for the Stag Hotel in Moffat for a pint of Tennant's and a meal.