I'm running out of unique Marilyn Summits I haven't climbed which can be reached there and back by car within a fiteen hour day. Due to the expense of travelling, even though fuel is cheaper than it was previously, I cannot justify a solo trip just to visit one summit - there has to be two to make the day worthwhile.  From my home in Pickering North Yorkshire, there remains a few places in the Scottish Lowlands where two summits are reachable within a day. The hills and mountains of North and Mid Wales I need to climb are now unreachable in a day and require an overnight stay.

I set out for Newcastleton in Roxburghshire at 5.45am, stopping off at the Tesco Store in Carlisle for a comfort break and "coffee to go" from the Costa Coffee shop there. The short departure from the M6 cost me time as I got stuck in the Carlisle rush hour traffic for ten minutes. Next time I will likely use the Motorway Services a few miles south instead. The stop allowed me to give Treacle, our cross Lakeland / Border Terrier who was accompanying me on this adventure a comfort break.
At 9.15 am I reached the parking place for my walk at Braidlie Farm - grid reference NT 477966. This is just four miles NNE of the strip village of Newcastleton. The temperature was -2c when I set out at 9.30am on a pleasant dry air morning with clear views to the fells above me. The moor was frozen with patches of snow remaining in places. It wasn't surprising there was not full snow cover, as this has been our warmest winter since 1910.
Today I am using the Viewranger app on my phone to aid navigation. I started using Viewranger in the Czech Republic in September 2015, and have been slowly getting to grips with it ever since.  I have been using various Garmin GPS devices since 2006. Last year I also trialled a Memory Map TX4 Android GPS / Smartphone which proved unsuccessful as the device I had was not waterproof, despite claims to the contrary. In November I purchased a Vodafone Ultra 6 phone. This cheaper phone (£115 outright) is not waterproof (unlike phones such as the latest Moto G) so from the lesson learnt when using the TX4 unit I bought an Aquapac waterproof case to go with it. The Aquapac would not be needed today... In addition I always carry map and compass and my trusty Garmin GPS62s as a backup. This GPS is carried in my rucksack now I use Viewranger and is also recording my route. I generally download the Viewranger Ordnance Survey Map tiles in 1:50K and 1:25K for the areas I walk from Viewranger and today was no exception. This means the mapping runs independently of the mobile network as the OS maps are stored on the phone itself. The previous night I had downloaded three 1:25K tiles and one 1:50K tile which more than covered the area of interest at minimal cost.  With Viewranger on an Android phone the app is installed into the phone memory and the mapping goes on to the memory card, which in my case is 64 GB in size, so I have plenty of room for the mapping I install for the various european countries I visit every year. Most of the maps on my phone were downloaded from Viewranger, and these are provided free of charge under Creative Common Licence from the Open Street Map project.

So, let's get back to the walk and my Summits On The Air activation...

This was good and easy moorland walking with sheep trails and quad tracks to follow. The frozen ground helped and my boots stayed clean. Treacle was thoroughly enjoying herself, taking advantage of the occasional patch of frozen snow to grab a mouthful, something she seems to enjoy doing. She looked very smart today in her tartan jacket having recently had a haircut: 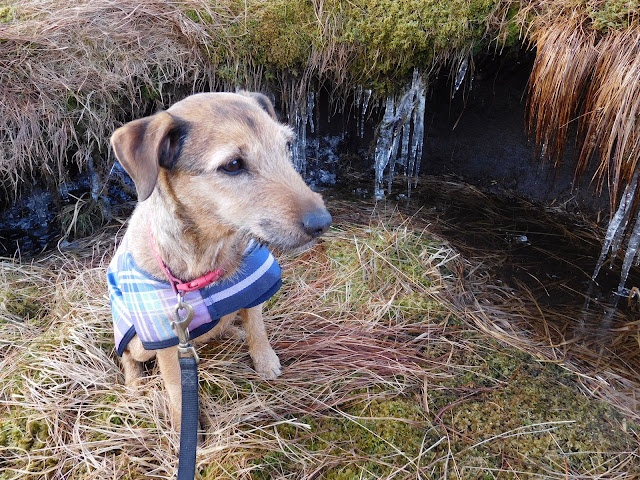 The summit of Greatmoor Hill GM/SS-114 offered me some far reaching views - the Eildon Hills near Melrose always stand out well in the region due to their characteristic twin humps: 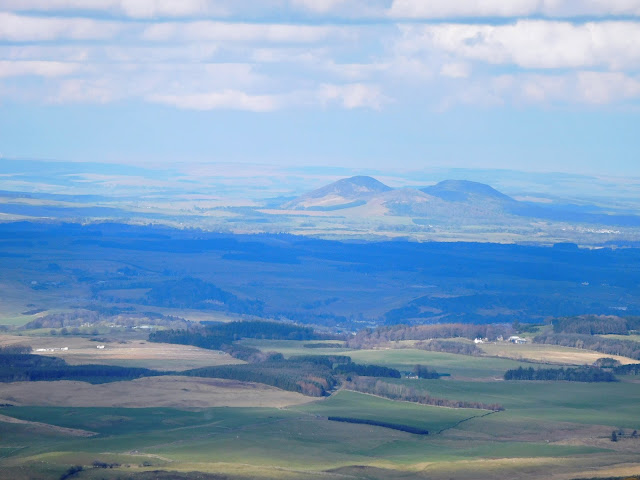 Today I was carrying the Yaesu FT-817 HF Transceiver, with a 4.2 amp external LiFePo4 battery running 5 watts output. My antenna was an inverted vee dipole for the 40m, 30m and 20m bands mounted on a 5m fishing pole. As well as a trig point and large pile of stones there was a fence running across the 599m high summit which provided a convenient fixing point for my antenna pole. There was also a well crafted stone cairn on the other side of the fence. 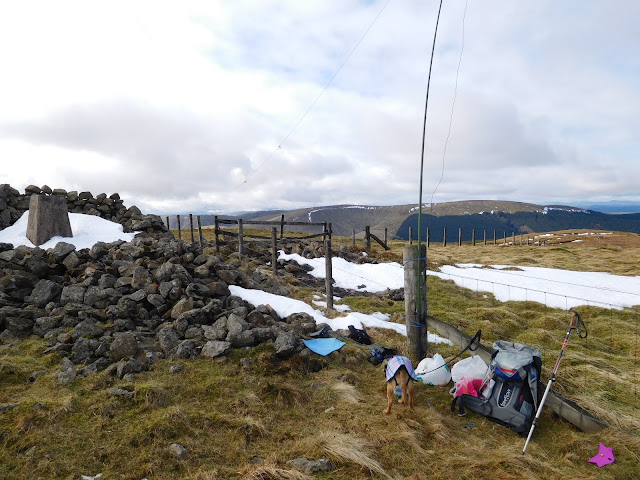 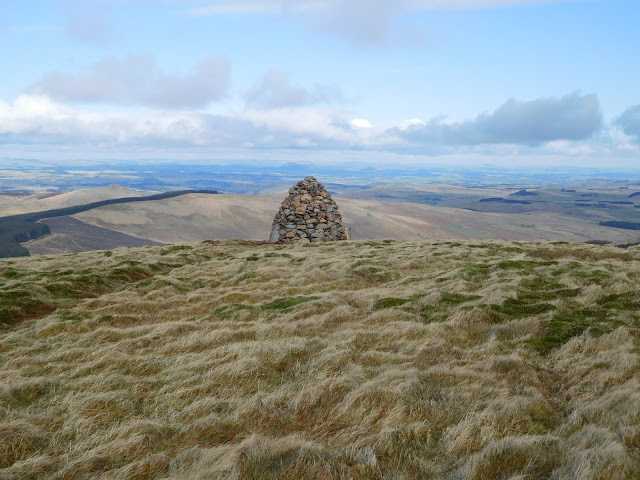 The 7th SOTA radio operation of Greatmoor Hill got underway then by GM4OBK/P (my official Scottish callsign) at 1115 am when I made a contact with Mike DJ5AV in southern Germany. In 40 minutes 42 stations were logged, with 26 contacts in Morse and 16 using Voice communications on the short wave bands of 40m, 30m and 20m. During the activation I made contact with two other summit stations. This was DL8DXL/P Fred on the summit of Rotstein in Germany, and GW4VPX/P Alan who was on Mynydd Troed in South Wales.  I believe that running an inverted vee out over the line of a metal fence enhances the signal and this proved to be the case today...

Moving off Greatmoor Hill I made my way down Starcleuch Edge to a col at Windy Swire. From there it was a simple matter to follow the fence up Windy Edge to my second summit of Cauldcleuch Head GM/SS-106, which at 619m was 20m higher than Greatmoor Hill.
This summit has only been activated four times since Jack GM4COX came here for the first activation in May 2005, and today Jack was on the other end of the line when we made a contact on the 40m band in CW. This would have been a "SOTA Complete" for Jack, sadly it was not for me as I missed him when he was operating here in 2005! So, if you are a SOTA Activator reading this and you are coming here please let me know so I can make a contact with you from my home station. The other operators who have been here are Andy MM0FMF (2014) and Gerald GM4OIG with Paul GM4MD (2013). After my activation exactly 100 contacts had been made from the summit of which 46 were mine, made today at an average rate of one contact per minute. I was lucky to arrive at the right time to again contact my two SOTA summiteer friends on the day from here when I again made contact with Fred DL8DXL/P on DM/SX-047 Lobauer Berg and Allan GW4VPX/P on GW/SW-015 Mynydd Llangorse.
I had made my way here by following a pre-programmed route I had created the my.viewranger server website on my PC, which I had imported into the Viewranger App. Now it was time to work out my own way down back to my car "on the hoof" so to speak, via the shortest route possible. A study of the land contours and map features showed that once again I could follow a fence. This ran over Muckle Land Knowe from where I could walk across the flank of Little Land Knowe.  This route would then take me down to the fords at NY 4732 9765. The way was a little tussocky to start with but once I got to around the 500m level the ground became pretty smooth. From Cauldcleuch Head to car took me just 80 minutes and I reached the end of my walk just after 4.00pm with plenty of daylight remaining.  It had been a superb day's hillwalking with amateur radio and Treacle for company. Out of interest I checked the power remaining in my phone battery which had been on all day, with Viewranger and GPS running and the screen off unless I was viewing it. The phone had also been used to self spot using the Rucksack Radio Tool App on the Vodafone network.  I had 30% battery power remaining.

From Braidlie Farm I turned the car round and made my way back to the A7 via Newcastleton and Canonbie. The M6 took me to the KFC in Penrith for some food and I arrived home in Pickering, North Yorkshire at 8.00pm.