Our plan today was to activate 7 or 8 one point Summits for SOTA on VHF. The weather was misty and wet, and it stayed like that until around 1.00pm. Two golf umbrellas were used to keep our radio equipment dry. A maximum of 20 minutes activation time per summit has been built into the schedule, with 10 minutes set up / take down time. The rest of the allotted time being given over to driving from point to point and then walking up the hills to the summit for our activations.  All 8 summits would be "SOTA Complete" for me as an Activator, as I had made contact with them all from home several times before, as a SOTA Chaser.

The only way to cram this amount of activations into a one day operation in daylight is to operate "smash and grab style" on 2m FM, which is what we did. HF equipment was carried as a backup but was not needed as all summits were qualified on VHF FM using the 145 MHz 2m band.

There is just room to park a car at the entrance to the waymarked footpath on the lane at grid reference ST 1299 8509. We turned right off the main path after 150m to climb via a well used path to the summit.

Our first contacts were with Simon, G(W)4TJC and his son Jamie M(W)6TJC. Both were operating /A from a hotel near to our location. We arranged a rendezvous with Simon on our next summit. The take off from all the summits visited across the Bristol Channel was superb and we made contact with a long time SOTA friend in Peter G3TJE, who I often work from home when he is activating using Morse Code.  Another regular called in. This was Rod M0JLA from Hereford, who was worked before we pulled the rather damp plug... 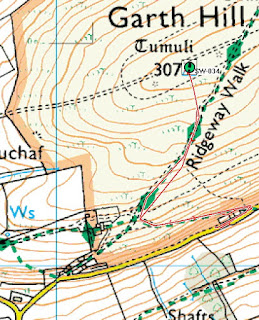 For this one we found a parking place before some cottages on Heol Goch, a road that runs along the southern flank of Garth Hill. A public right of way leads into the access land to join the Ridgeway Walk.  We were soon at the trig point setting up. After a short qualifying activation and just as we were packing up we were joined by Simon G(W)4TJC who was taking over on the summit fromus and intending to use the 10m and 6m bands. This was the last day of the summer period for the 2015 SOTA Challenge and Simon was anxious to get a few more points... It's not the first time I've met up with other activators on a summit, and this certainly won't be the last! We had time for a chat and a photo opportunity...

I think the last SOTA Management Team member I met on an activation was Andy MM0FMF, when he was on his way up Blencathra LD-008, and I was on my way down.


After two easy ascents it was time for a longer walk of just over one mile up to Mynydd y Glyn. We parked at the road end to Cefn-coed Farm (good job too - there was nowhere to park up the farm road) and walked up the track which is a public right of way. It had stopped raining for a while - great! 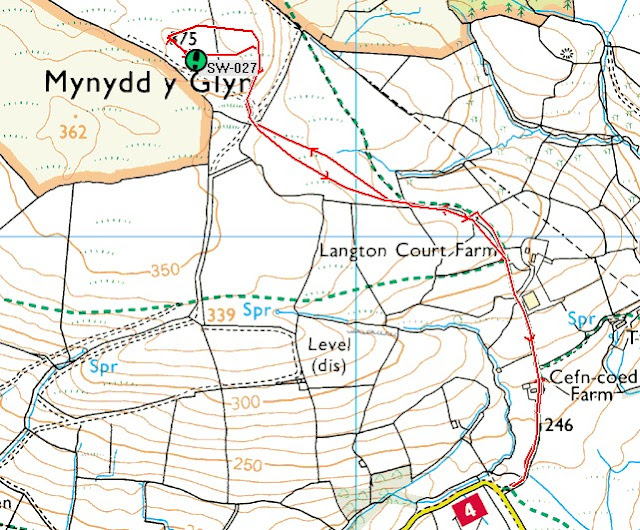 The route was gated and the summit was easily accessible even though it was just outside the nearby access land. On the summit we noticed this unusual device around 50m from the trig point: 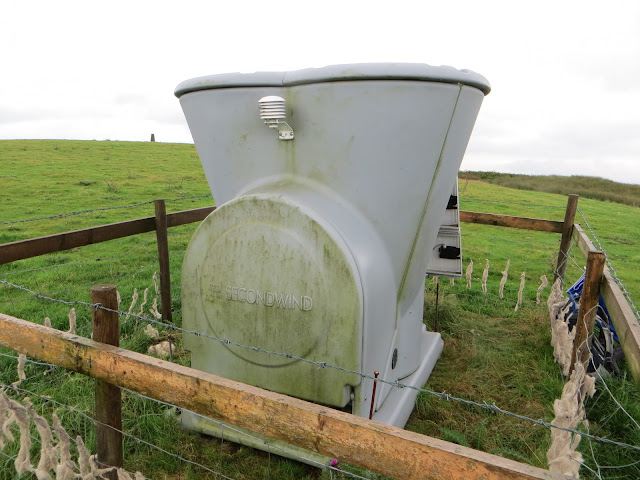 This is the Triton Wind Profiler which is a remote sensing system providing data to a company interesting in developing wind farms.


This is one of the easiest summits to reach in South Wales. Eglwyslian Road runs across the  flank of the hill at 327m and the top is just 55m higher at 382m ASL. It is quite close to Pontypridd, above Taff Vale, which is a place with some social history after a well known legal case involving a strike by workers, played a part in the formation of the Labour Party.

Returning to the car we had our lunch before proceeding to our next summit. 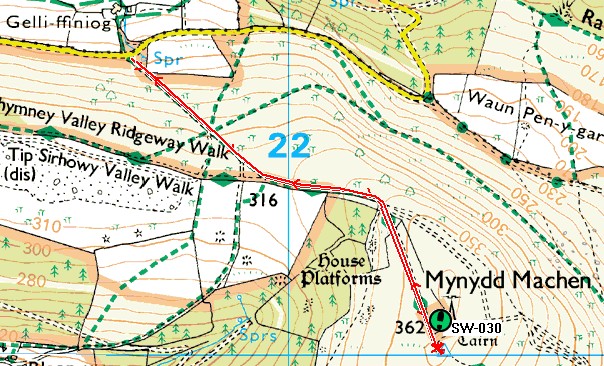 There was just room to park at the end of the path which leads to the plateau of Mynydd Machen. The large mast on the summit did cause some intermittent intermodulation problems on 145 MHz, but in between the bursts of noise we were able to complete six contacts before moving off.

Another hill with masts on it but this time there was no problem with interference to our reception - it looks as though this W/T Sta is now redundant. To the left of the locked gated entrance to the track is a large solar farm.

This looks to be a very secure installation with cameras. The track used leads into gated access land on the plateau where the summit is located. We operated 10m down from the highest point which was more convenient, more sheltered and well within the 25 meter drop zone, despite the slight dip between the two points.

This was the extra summit we did not think we would not have time for... In the event we had pulled back over an hour from our planned schedule so we went for it, despite it being the longest walk of the day at just over 1.5 miles each way. There is plenty of parking over the cattle grid near some sheepfolds, and a track follows pylon lines almost to the summit trig point:

By the time we got back to the car we were pretty well shattered, but there was time to squeeze in a final SOTA Complete near to where we had met up in the morning. This was the well visited "drive on" summit of Wentwood.


A winding tarmac road through woodland leads up to the car park for Wentwood, where most of the highest part of the forest has been felled and replanted with saplings. A two minute walk took us to a convenient tree stump on which we fastened the fishing pole.


We were anxious to get finished and return to the pub four miles away where I had parked my car earlier - for some food and a celebratory pint.  There were plenty of callers (11) though before the frequency went quiet and then we packed up. When we reached the pub it was just going dark and it was rammed out with folk. The waitress said it would be at least 45 minutes before we could be fed.... so we left and went down the road to the M4 roundabout for a "go large" McDonalds instead, disappointing maybe, but quick and easy and we enjoyed it.

We still have unfinished business in South Wales, so we will be returning in due course to complete the final eight summits needed to finish the area off.

If you visit these easy to access summits in South Wales I hope you find this report useful.
Posted by Phil G4OBK at 18:06