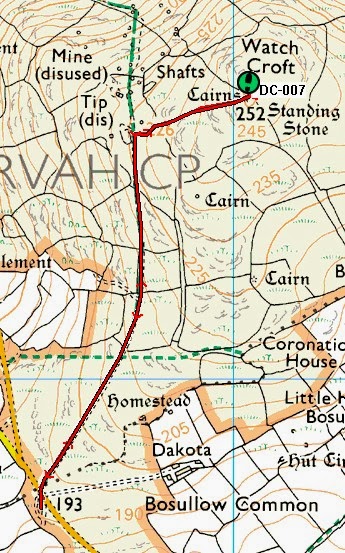 We had hoped to be activating Watch Croft DC-007 on Monday, however the weather prevented that. Instead we went to look around Godolphin House, a National Trust property. In the afternoon we went down to the end of The Lizard, and struggled to find a tearoom. Everywhere was closed, so we returned to the Polurrian Hotel where we were staying for a clotted cream tea.

The BBC weather forecast for Tuesday was giving heavy showers as opposed to heavy rain. so we drove across to Penzance and then towards the north coast to the parking place for Watch Croft, G/DC-007. We parked on the C Class road 1 Km south of the summit at spot height 193 and used the bridleway track to reach some cottages. Here we left the track to cross heathland to the trig point where there is a large pile of stones and a substantial shelter.

We were glad of the shelter - just after we arrived the heavens opened so we hunkered down for 10 minutes or so until the rain stopped. It was only then that I got the radio gear out of my rucksack and set up the station. The middle of the trig point was missing and this made mounting my 6m pole easy. The HF link dipole was pegged out and I started on 40m CW with a Morse contact with my friend NIck, G4OOE in Scarborough. After a while I changed mode to SSB and Nick was again the first contact on voice mode.

Watching the sky it was apparent that it would rain again, so I left the 30m band out and went quickly to 20m CW. 10 contacts were made on that band, with only one contact outside Europe. This was with N1EU, Barry in New York. After 40 minutes operation it started to rain again. I had 61 stations in my log so we packed up and returned to the car to head to St Ives for a look around and some lunch. Cornish Pasty and beans being the order of the day....

I was hoping to activate Hensbarrow Beacon DC-004 in the afternoon, so we motored there after visiting St Ives. A road runs across the activation zone which is in the midst of an enormous China Clay Quarry, not a nice place to be with heavy lorries coming and going every few minutes. It was now raining extremely hard and this ruled out an activation. The intention was to set up and operate near to the road but this was not to be.  There were also overhead power cables and this concerned me somewhat. My intention was to try again the following day when hopefully the rain had stopped.
Posted by Phil G4OBK at 20:00