It was the first ever SOTA International Cycling Weekend and I made a late decision to take part in the action by spending two further days in Northumberland around the Scottish border bagging and activating my last four Marilyn summits in the region.  The previous day I made an on-line booking to stay in the YHA Bunkhouse in Bellingham. This was the day after I returned from the same area when I climbed The Cheviot and Housedon Hill with my friend Nick G4OOE, who thankfully did the driving on what was a long day.

I left home at 5.45am and within ten minutes I hit a problem on the A170. A road traffic accident had occurred just after 5.00am in the village of Wrelton and this is the scene which presented itself: 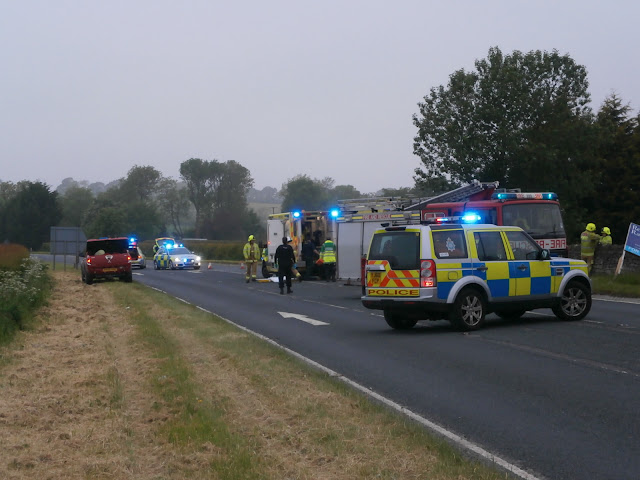 I later discovered that a Ford Fiesta had crashed and rolled over. 5.00am was a funny time for that to happen, and I wondered if it was anything to do with the Modified Car Show which was due to take place later that day in Pickering.... A diversion was in operation but it was only a short detour and I was soon on my way up to the east side of Cumbria travelling via Alston and the North Pennine road which passes NP-003 Burnhope Seat.

My bike was inside the car. Although I ride a lighter bike than this one locally on an almost daily basis I hadn't ridden this machine for around two years, so the previous day I serviced it by way of cleaning it down, pumping the tyres up to 70 psi, cleaning and lubricating the chain and gears and adjusting the brakes.  I also removed the front mudguard on account of the rough tracks to be encountered on my SOTA tour and to help ease loading the bike into my car. The recent weather had been dry and it was expected to remain so.
The first obstacle was a locked gate into the southern corner of Kershope Forest, so the bike was lifted over the gate and off I went, travelling two miles before a steep hill became too much so I dismounted for a short section before continuing to ride. I realised that I could not ride to the summit of Sighty Crag, or even push my bike up to it. I left my bike in a small quarry at 5872 8056 after 3.4 miles and didn't feel the need to lock it in this remote location.  From there I set off on foot to head towards The Hewn Block - some crags on the tussocky moorland to the east of my bike park. At 5917 8056 I hit a barbed wire fence and handrailed along it in the hope of finding a gate or stile.

There was none, so at 5925 8028 I scaled the fence to eventually reach another fence (non-barbed) which ran along the line of the summit. it was slow going over the tussocks but I reached my goal at 1035 am.

I can understand why G/SB-005 is the least visited of England's Marilyn's (and probably the least activated for English SOTA). This is due to its sheer remoteness, the long walk/ride in regardless of which route is taken and the summits lack of redeeming features when you get there, especially when the mist is down as it was on my arrival!

A friend of mine sent me this poem about Sighty Crag - writer unknown but whoever it was, the poem gives a good appreciation of why this place is the least visited Marilyn summit in England:


We guys who hills in Blighty bag
Might shy away from Sighty Crag.
It surely is a mighty drag
Enough to make the sprightly flag
When faced with forest, mire and hag
Shrouded in a whity clag.
But conquer and you'll rightly brag
'I found the top of Sighty Crag!'
Descending is a further fag
And goes to show we're slightly mad.

The website www.hillbagging.co.uk shows today that 977 registered users have climbed Helvellyn - the most visited Marilyn in England. Sighty Crag is the least visited - only 61 registered users have been there. It was 60 before I called in. Next least visited is Peel Fell with a score of 72....I went there after Sighty Crag. Housedon Hill is 3rd from the bottom with a score of 73....I was there with Nick G4OOE two days before Sighty Crag. It's great to go to places that the herd don't visit, it gives me a good feeling, a feeling that the explorers of old must have also felt. That's wanderlust for you!

My QRP SOTA station was set up for HF CW and VHF 2m FM using homemade dipoles - a vertical for 2m and a link dipole for 40m, 30m and 20m. Conditions were good and 32 stations were worked for SOTA, 25 on HF and 7 on VHF. This was the first time that the 20m and 30m bands had been used out of the 17 previous activations of the summit. The last activation being in August 2011 when Paul G4MD/P visited.

Activity complete I chose to head across the moor to an unmarked cairn at 5978 8071: 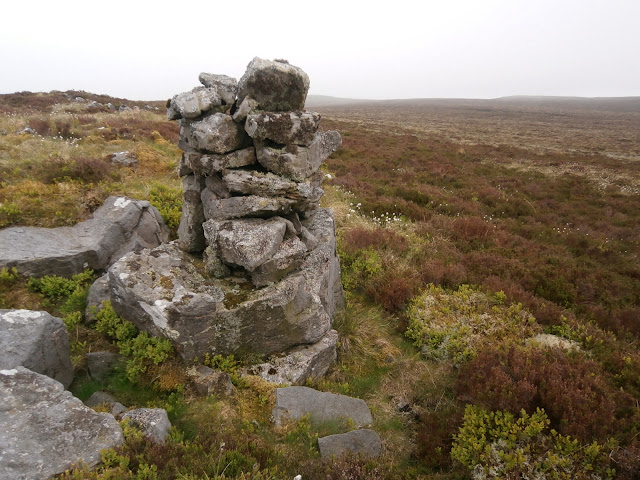 I was back at the quarry to collect my bike at 1255 pm and chose the steeper route back to The Loan where my car was left. This was a white knuckle ride, exhilarating to the limit  as I reached a speed on 28.5 mph on the downhill, only to receive a puncture on sharp stones near the bottom, however there was just enough air in my rear tyre and enough speed to take me to the forest gate!

I loaded the car and had my lunch before driving to my afternoon summit of Peel Fell G/SB-004, on the Scottish Border. I decided to walk in to this one and repair the bike at the end of the day.  I put Newcastleton into my Tom Tom and that set me on my way around Kershope Forest via a gated road and then from Newcastleton I went on towards the top end of Kielder. (See next blog for Peel Fell G/SB-004).