I'm grateful to Dominik from Switzerland (HB9CZF) for providing the information from his website about this route starting from Dinas.

We had another early start from the home QTH of Geoff M6PYG who lives near Malvern, and were walking just after 8.00am.
The summit of Waun Fach is the second highest Marilyn Summit within the Brecon Beacons National Park. This was the second day of the 2012/13 SOTA winter bonus, and the activation of Waun Fach was worth 11 points if the 3 bonus points were included.

The parking place we used is at the top of a narrow lane near Pengenffordd. This is just off the A479 Talgarth to Crickhowell road and lies at 1200ft, a good height to start the climb up to Waun Fach, which is 2661ft high. We could see we were in for a day of poor visibility and we lost our view within 30 minutes of starting the walk as we made our way across the flank of Y Grib, an outcrop on the climb. With visibility down to 100m it was not surprising we went slightly out on the navigation as you can see from the GPS track above, but we soon regained the correct bearing to make for Pen y Manllwyn which lies on the long plateau up to the summit. The ground was frozen once we reached 2000ft, with lying snow.  This was good, otherwise the mile long plateau would have been just one long eroded wet bog!

The summit was reached after 110 minutes, over a distance of 3.5 miles.  Our amateur radio operation for Summits On The Air (SOTA) was just about successful - we made five contacts the furthest being down to the station of Don G0RQL who lives near Holsworthy, a distance of over 90 miles. This was quite impressive on 2m FM with 5 watts of power and a vertical dipole. 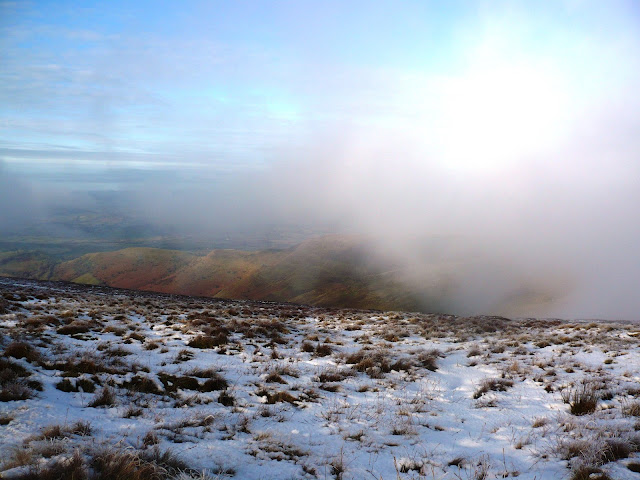 We did not stay on the summit long and as we descended the mist started to clear.

We found a better track down than on the ascent and enjoyed visiting the cairn on Y Grib on our descent, as we couldn't see it in the mist on our way up.

We reached Dinas at 11.45am and after a snack we made our way to the parking spot for SW-009 Mynydd Troed, which we could see from Dinas. The summit is on the opposite side of the A479 road at Pengenffordd.
Posted by Phil G4OBK at 10:00