Friday 28 September and I was taking some family members, notably Stepdaughter Sarah, Son-in-law Andy and Granddaughter Amie to Manchester Airport to pick up their connecting flight back to Sydney, Australia.  As I often do, I try to fit in some Summits On The Air (SOTA) Fellwalking with a journey of this type, so I chose the Southern Pennine summit of Pendle Hill (557m) near Burnley as my target.

The simplest and shortest route to the trig point is from Barley Lane, north of Barley village. There is plenty of roadside parking there most of the time (don't try and park there on Halloween though!). The total round trip is a mere 2.25 miles there and back with an ascent of 750 feet.

After leaving Manchester Airport at 2.00pm I was parked up and walking by 3.15pm. It took me 26 minutes to join what was a large youth group at the freshly painted trig point on Big End or Beacon, as it is known.

As a Lancastrian Pendle Hill was the first hill I ever climbed on 29 November 1964 with my school, and this was my 3rd visit, having last been here with a walking group in September 2005 when I also operated ham radio for SOTA.

As the youth group were hugging the trig point I moved away slightly south west to take a little shelter behind a cairn where I set up my radio equipment, a Yaesu FT-857 running 50 watts from a 5 amp lithium battery and  my vertical dipole antenna.
The weather stayed cool but dry and I operated for a 30 minute period completing 27 contacts on VHF 2m FM and SSB. I did attempt to operate in CW (Morse) but no stations called me back.
At 4.20pm I left the summit reaching my car at 4.45pm. On my way down at grid reference SD 806418 where the path turns, I noted the height here was only 12m below the summit top. This would make a good operating position, especially for HF work, if weather conditions were bad and shelter was sought from the elements behind the wall.
The path up to Big End is well maintained to reduce erosion, as the photograph shows. This path is well used.  The next time I visit I will likely take up a walking group and make a day of it from Barley village, on the popular circular route of around 8 miles.

After making contact on the summit with my friend Geoff Peel G6MZX, who lives in Thornton in Craven,  I was invited to call in on my way home for a cuppa. Fortunately I had the time to do this and enjoyed the company of Geoff and his wife Joan for around half an hour before continuing home to Pickering.
As I approached Bolton Abbey I noticed the bottom end of a strong rainbow emerging from cloud: 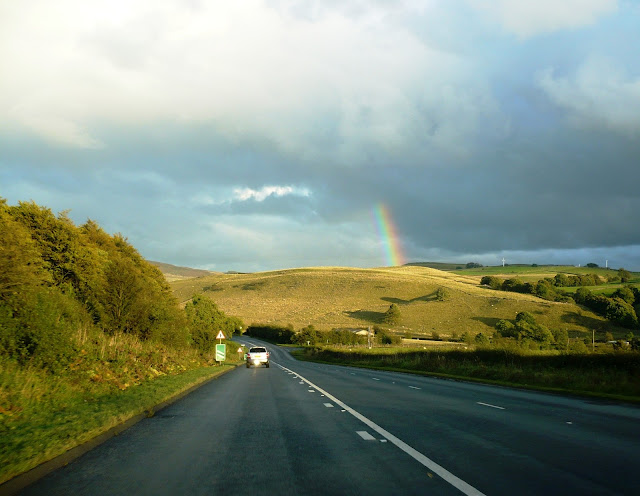 The drive back was not the easiest. This was due to several road closures caused by the flooding earlier in the week.  I was routed via Harrogate and York on the A59. The A59 access on to the York ring road around Poppleton was very congested due to all the traffic using the same road due to other closures.  This meant I reached home in Pickering at 8.00pm, around an hour later than should have been the case.
Posted by Phil G4OBK at 23:59