I decided when I got parked to leave the bike locked on to the carrier and walk to the summit... so car and bike were left at NY 312884, part way along the access track to Calkin Rig GM/SS-196: 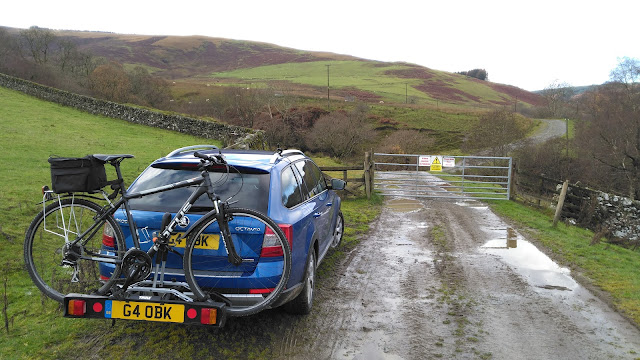 This is my Focus (Non-Electric) Hybrid "shopping bike" on the back of the car - the only bike I currently have. It is fine for riding on forest tracks if they are a reasonable grade. The frame is aluminium so it is reasonably lightweight. If I'm SOTA cycling I usually pack my KX2 transceiver and aerial bag in the saddlebag, and the pole and ancillary radio bits, food and drink (if needed), are carried in a day sized rucksack on my back. Carrying some items in the saddlebag takes some of the weight off my back. I don't think it is good for balance to have a big heavy rucksack on your back when cycling.  The bike is usually fitted with panniers for carrying shopping, but I remove these when I am riding on rough tracks.

When I got to the Calkin Rig summit access track there were no restrictions and the gate was undone, so I drove up the track a half mile to the first closed gate at NY 312884, where I could park.  At that point I decided that I would walk to the summit rather than cycle. It took me 23 minutes to reach NY 294885, the point at which I left the track to go SSW. This is where I would have stashed my bike had I ridden it.  After climbing a steep bank I was on the boggy moor following the fence right to the summit of Calkin Rig, which took another 25 minutes. There was mobile coverage on the EE Network on the summit for spotting, but no coverage for Vodafone.  You will see from this map which way I went to the summit, and the way I came down, which was an improvement on the walk up with more level grass on which to walk and less rough moorland. There were still sheep grazing in this area despite the onset of winter:

My activation on 40m and 20m CW/SSB. One QSO on 2m FM was completed with G7THI in Hoff, near Appleby, Cumbria, with the remaining 36 contacts being on HF with all stations within Europe. 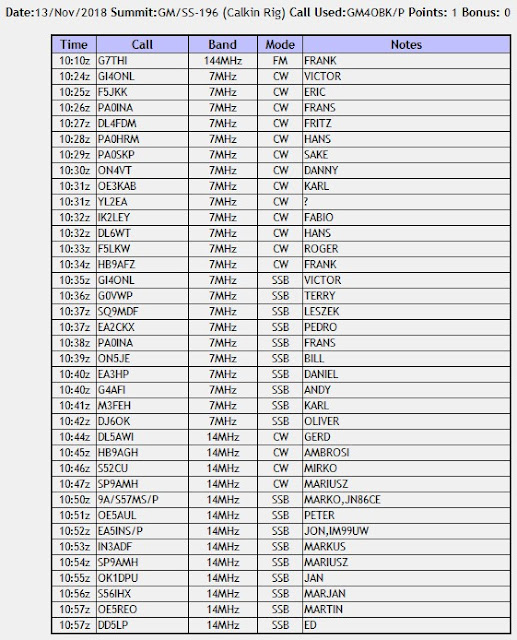 Coming down the moor back to the gate near Calkin was a better route than following the fence on the way up, however I did encounter an unseen water hole with my left foot, going down to the knee which left me with a boot full of water for the rest of the day. I was back at my car at 1145z having left it at 0910z.  When I re-programmed the Satnav it told me that my destination - the parking place for my 2nd summit, Larriston Fells GM/SS-161, was 19 miles away.  Blog report on that activation to follow...
Posted by Phil G4OBK at 23:59