I awoke in Idwal Cottage YHA at 6.00am feeling fine after my previous days Glyder and Tryfan walk, except for having pins and needles in both hands. This soon wore off once I got moving.... Breakfast was some Granola I had brought, a couple of slices of toast and marmalade and a cup of tea. I finished off the pint of milk left over from the Granola leaving the hostel on a beautiful morning to drive just two miles along the A5 from Idwal Cottage YHA to the Gwern Gof Isaf campsite:


My friend Nick Langmead (G4OOE) had provided me with a route from here taking in NW-002 Carnedd Llewelyn, the second highest Marilyn summit in Wales, and NW-013 Pen Llithrig y Wrach.  He told me that the owner of the campsite and farm would allow all day parking by the gate on the A5 for just £2 per day.  Campers were emerging from their tents and vans and even though it was only 7.00am I called at the farm to pay my dues which were gratefully received.  A short walk along the A5 took me to the private road owned by Welsh Water which took me up to Ffynnon Llugwy Reservoir. This map shows my whole route, which differed somewhat towards the end from the one done by Nick G4OOE and Geoff M0PYG, The GPX file is loaded into the SOTA Mapping Project and it can also be downloaded from Viewranger: 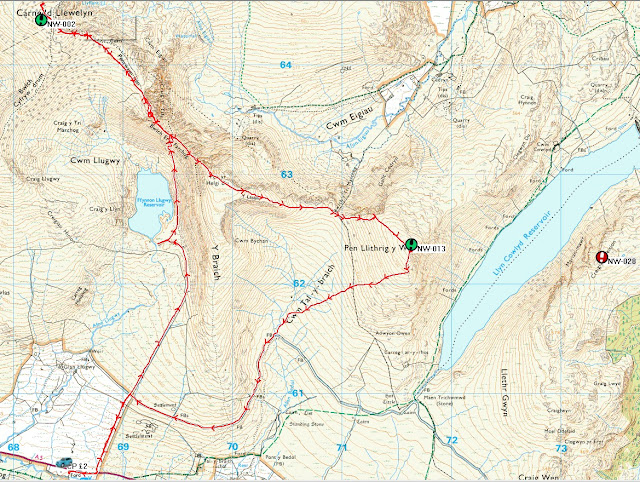 The private road had a locked gate. A steady walk up the incline brought me to the reservoir. I overshot the path slightly as you can see from my GPS trace, before realising that I needed to take the path to the east of the reservoir to climb to the col of Bwlch Eryl Farchog. As I reached the reservoir I got a super view of Tryfan and the Glyders where I had walked the previous day: 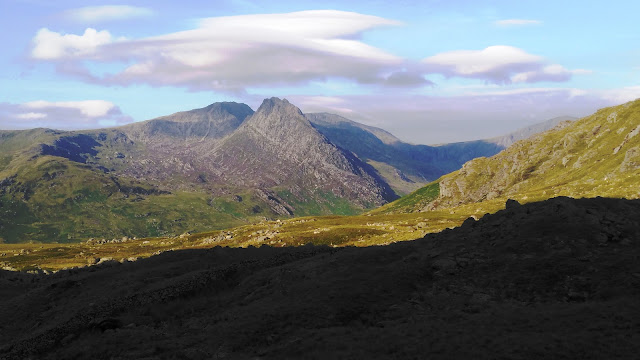 The man made reservoirs in Snowdonia are nothing short of beautiful on a day like the one I had on 25th July 2017. Ffynnon Llugwy Reservoir: 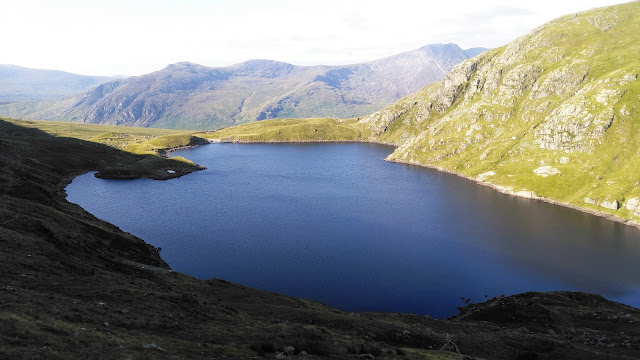 The well used path to the Bwlch has steps cut into it in places and posed no problems. Once the top path was reached it took 40 minutes to reach the plateau on Carnedd Llewelyn (1064m). Being so early I did not see a soul until I was on my way down. There were a couple of places where it was necessary to use the hands to scramble but nothing too awkward and risky. I walked on beyond the highest point and came to rest at a natural rock wall where there was a clear falling away of the mountain to the north. I always find when using VHF that if I can set up on the edge of the land as it falls away more steeply, my signals are enhanced. Once again I was only using a Yaesu VX-170 handheld with the RH770 extended whip.

A 25 minute session on 145 MHz with the handheld garnered 14 contacts with stations in England, Wales, Ireland and the Isle of Man. After a drink and an energy bar I made my way back to the Bwlch then onwards towards Pen Llithrig y Wrach, NW-013.

Once again there was a little scrambling to reach the summit of Pen yr Helgi Du (833m) on my way to NW-013 before dropping down around 200m to Bwlch y Tri Marchog from where there was a straightforward climb on grass to the summit of Pen Llithrig y Wrach (799m). Despite crossing Pen yr Helgi Du which was 34m higher than Pen Llithrig y Wrach, the earlier summit did not have the sufficient 150m or more drop from Carnedd Llewelyn to count as a Marilyn, quite an unusual situation I believe...

After eating my lunch I started to make contacts as before on 2m FM. About half way through the activation an angry looking man approached the summit. He was sweating profusely. He gave me such a black look that I returned it and in an aggressive tone he said "What's your problem"?  I told him I didn't have one, what was his problem? To which he said it had been a hard climb and he didn't expect it to be like suburbia on the summit with me talking to people on my radio.  The atmosphere felt uncomfortable as the man appeared to be very agitated by my presence, so I packed up my rucksack and walked some 50m away from him to continue my activation of the summit.... I finished with 13 contacts in 20 minutes and by the time I closed down the man had gone on his way. Hopefully I did not ruin this lone wolfs day of peace and tranquility that much!

I came off the hill and lost any semblance of a path. The access land wasn't so bad for walking though - and a thin green strip of land, like a green lane almost, caught my eye down below so I made for that.

At the footbridge (SH 7039 6152) I found the green lane to be a good path beside the leat which was carrying water from Ffynnon Llugwy Reservoir down to Llyn Cowlyd Reservoir. I really enjoyed walking by the leat on the grass path. It reminded me of walking by the levadas in Madeira. There were a couple of herons fishing for food in the leat and fish visible below the surface. 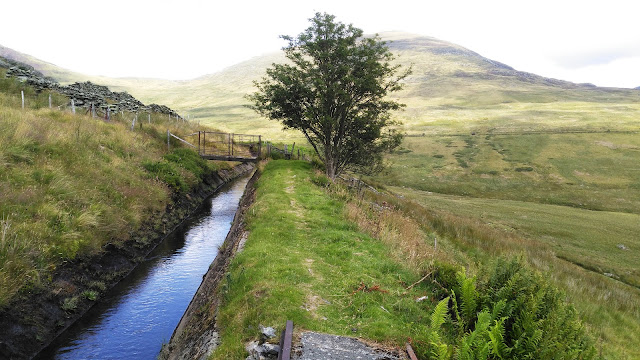 I rejoined the Welsh Water access road at a gate at SH 6906 6097 which returned me to the A5 and the Gwern Gof Isaf campsite parking place after a most enjoyable SOTA walk in perfect weather.

There was insufficient time left to climb any more summits in the day and to be honest, with the long drive back home to North Yorkshire, I think I had done enough.
Posted by Phil G4OBK at 23:59