SOTA in the Estremadura Region of Portugal - Day Three

My last day and I decided to concentrate on the three one point summits which lie on the Setubal Peninsula 25 miles south of Lisbon.
CT/ES-008 Serra do Risco

I left Lisbon at 6.45 a.m. by skipping breakfast and filled the car up with fuel en-route to ES-008 also buying a sandwich to supplement my snacks for the day. Fortunately for me, Manuel CT1BWW had uploaded a GPX track into the SOTA Mapping Project and by using this in Viewranger on my phone I was able to locate a roadside parking place near the large quarry here and the track, which led me through scrub to the climb of the hill itself. It took an hours continuous walking in fine weather to reach the trig point: 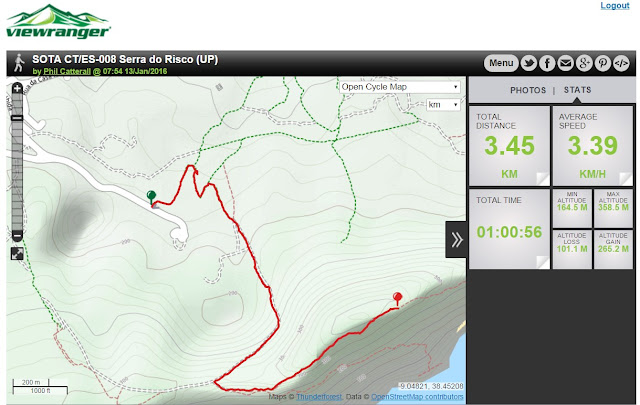 The quarry men had started work and some blasting was taking place below me as I climbed. Once I reached the turn the rocky path surface was quite difficult for walking. This is not a hill to climb in short trousers or even short sleeves as the sharp foliage encountered (which had grown up to waste height,) would scratch you. I was walking on the top of a cliff, with the sea on one side and the enormous quarry on the other. Despite the summit's name Serra do Risco I did not feel to be at any risk as I kept away from the edge, which was protected by the low bushes.

There was just room to peg out my 30m band dipole at the trig point. If the antenna had been longer it would have been too close to the precipitous cliff for comfort. 22 callers came in thick and fast using Morse and Voice - one notable contact was with Carolyn GW6WRW/M who was driving in her car en-route to an activation in mid-Wales and I was able to give her a 5-9 report! Amazingly out of the 22 contacts 13 were SOTA friends from the UK, and again Nick G4OOE from Scarborough was the first station logged: 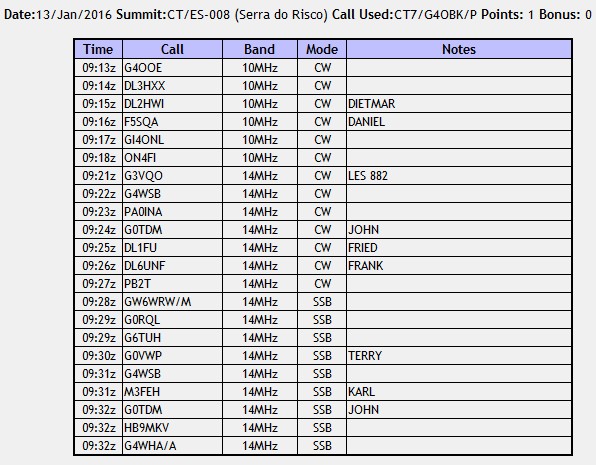 I could see ES-003 Serra de Arrabida to the north east which was where I was bound for next: 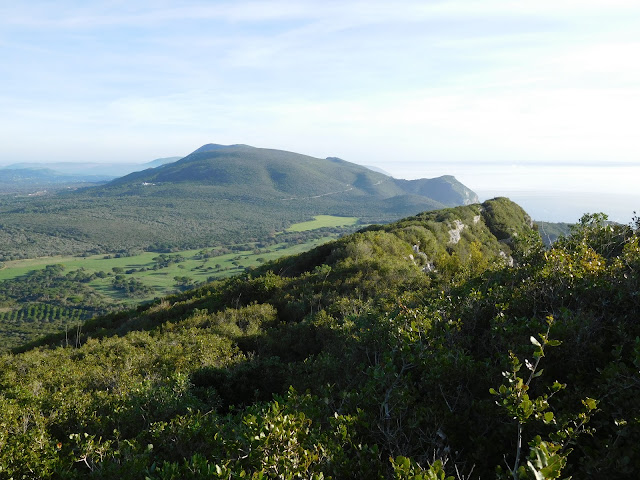 I needed a permit to visit this summit in the National Park. David CT1DRB was kind enough to obtain this for me. This is the text converted to English using Google translate: 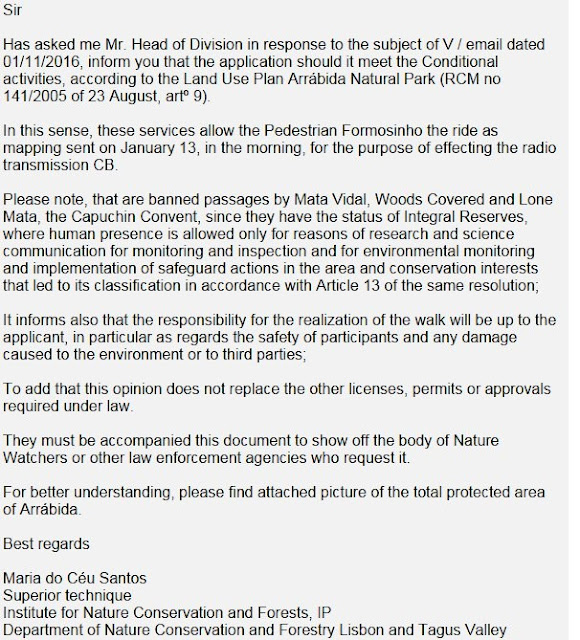 After leaving the quarry road to ES-008 I drove along a country road to reach a hamlet called Casais de Serra. From here I turned left down an unsurfaced gravel road and drove for several miles in the Arrabida National Park. My intention was to use the SMP track which had again been provided by CT1BWW, however I wasn't paying attention and drove on beyond the parking place on the narrow track where it difficult to turn the car round. After looking at my position on my tablet I decided to continue on to the hamlet of Picheleiros and use a route from there instead, which was defined on Open Street Map. The image below shows the CT1BWW track in red, my own track in yellow and a track entered after my activation by David CT1DRB in orange. I think if I had known about David's route I should have taken that, as this route from Picheleiros was most challenging. 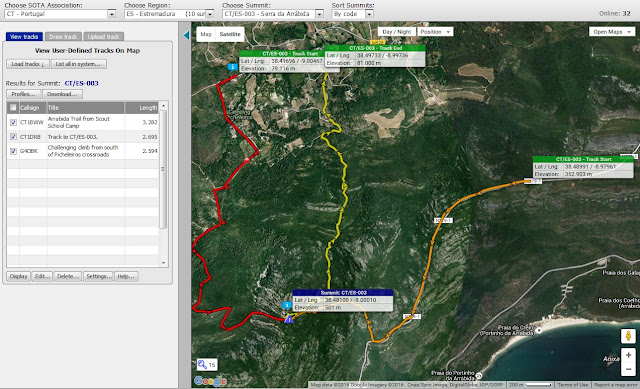 It took me 73 minutes to reach the summit. The path was steep and loose in places and I was glad of my walking poles both ways - without them I feel the ascent and descent would not have been possible by this route. It was a beautiful sunny day now with temperature of 16c and most pleasant to be walking in a thin long sleeved microfleece and no jacket. Once again on this walk you would not want to be wearing shorts or a short sleeved shirt on account of the sharp scratchy bushes. 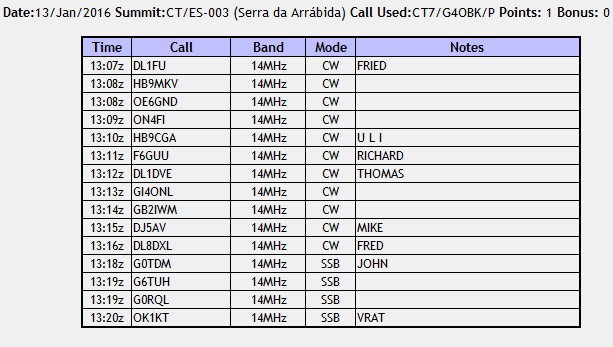 The 10 MHz (30m) band was closed - there was null propagation, so just 14 MHz CW/SSB was used. I completed 15 contacts in a short period of time, starting with Frid DL1FU in Germany and ending with Vrata OK1KT in the Czech Republic, both personal friends of mine who I have met thanks to Summits On The Air. Much care was needed on some sections getting off the hill, and thanks to my extended walking poles I made it back to the car with a few minor stumbles but no physical damage to my person on the descent. The area was remote and I saw no one at all. This was not a place where you would want to injure yourself and be unable to move. However I was comforted by the strength of mobile phone signals which were excellent throughout the Estremadura Region. Glad to say the only reason they were needed was for spotting my activity for Summits On The Air... 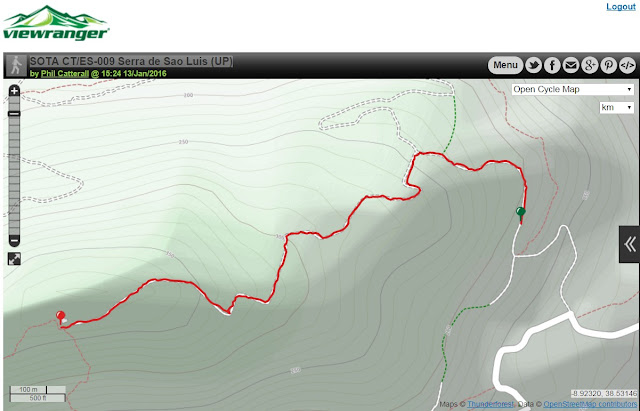 Pleasingly once I left the crossroads at Picheleiros below ES-003 the road to ES-009 was asphalt and it wasn't far from from the Picheleiros crossroads either to the parking place for my final summit of the tour.  I drove up a gravel track once I left the EN-10 road as far as I could to finish just below ES-009.  I parked up when it became too rough to proceed in the Fiat. From there it took me 33 minutes to walk to the summit - a 1.25 mile walk with over 600 feet of ascent. It was easy walking though, thankfully, as by now I was feeling the 3000 ft of climb of the day - the wide gravel track took me right to the summit, where there was yet another communications installation and some buildings owned by the Portuguese equivalent of the UK Forestry Commission.

After telephoning Judy (my XYL back in the UK) to let her know I was safe on my last summit of the tour I set to and worked thirty stations - starting on 14 MHz first. CT1GZB in Lisbon (Line of sight but still some distance away) was 5+9+30db and the strongest station I believe I worked all tour. There were lots of UK stations in the log - the last contact being with David G3RDQ on the 30m band. 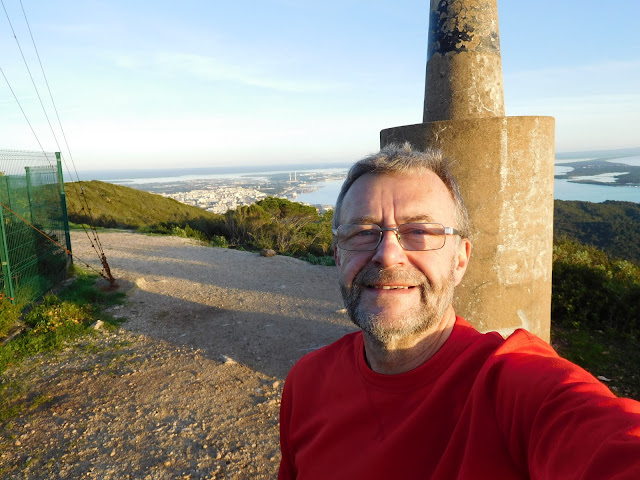 No wonder I'm looking pleased in this selfie - I'd finished a tour that may not have happened at all... It was touch and go whether I could fly out to Lisbon on the day of the Ryanair flight itself, which left Manchester at 1710 hrs. The planning for most of the summits visited was done on the morning of the flight day and in the Red Frog Speakeasy bar with David CT1DRB, Pedro CT1DBS and Joao CT7ABE over some beers at the end of day one of my tour. Thank's guys for your hospitality, advice and welcome to your country.

During the course of activating the 10 summits I drove over 600 Km in my Fiat Punto hire car, much of it on the motorways north and south of Lisbon. Two weeks after arriving home the toll cost showed on my credit card for the motorway tolls - £15.45. A small additional cost was the transponder hired from Eurocar so that I did not have to stop at the barriers on the motorway exits - at a cost of €7, this was well worth it.

So I am 10 uniques the richer, of which 9 are SOTA Completes.  216 Portugal QSOs were logged to add to the 369 QSOs previously made on my CT7/G4OBK/P Algarve Tour in September 2014. This last day of three had been tough - although I only walked 6 miles in total I had climbed almost 3400 feet.
Posted by Phil G4OBK at 09:47

Started Blogging in 2009. Author of three other blogs:
Wainwrights Coast to Coast
Wainwrights Pennine Journey
Wainwrights On The Air
Website
My Weather Station
Keen outdoor enthusiast enjoying walking, cycling, travelling, music and theatre. I have enjoyed amateur radio as a sedentary hobby since 1968 but for the last 15 years I have also been climbing hills and mountains worldwide to set up my Ham Radio station to use Telegraphy (Morse Code), data and voice communications from the summits. I started out as a short wave listener in 1968, and got my UK Home Office transmitting licence in 1982.
The links below go to summits I have visited and activated for Summits On The Air (SOTA) since 2005. I try to report on every summit I visit.
I am a retired Communications Specialist living in North Yorkshire since 1993. I served as a Magistrate in the County from 2005 until 2018.