My XYL Judy and I normally book a short break once Xmas and New Year are out of the way. Last year it was Southern Ireland - this year we opted for Cornwall. The holiday usually involves some element of walking and activating summits for SOTA. We also enjoy good food and visiting stately homes and other places of historic interest. Good hotels within our budget are easy to find in the winter months. 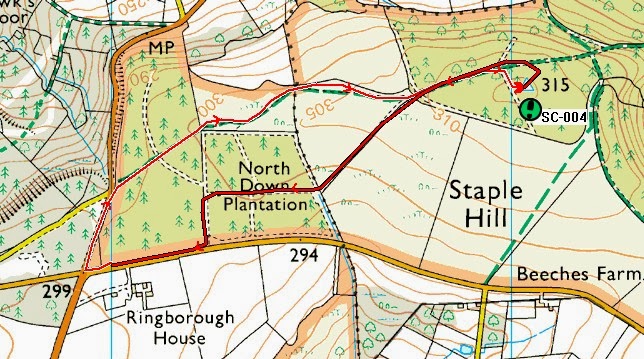 The south west corner of England contains seven Marilyn Summits and the plan was to visit all of these over five days. The wet and stormy weather that is currently hitting the UK curtailed this aspiration and we only visited five of the seven, plus one extra summit, Staple Hill, south of Taunton on our way south. I'll start my blog with a report on that one.

We were booked into a Holiday Express on the Saturday close to the M5  on the outskirts of Taunton and arrived in that area by mid afternoon. Staple Hill is located in woodland five miles south of the town. I chose to park near the crossroads of the B3170 at Ringborough House and use the route suggested by previous SOTA activators. We think we found a better route on our way back when we passed through North Down Plantation - see highlighted route on map above.  It took 18 minutes to reach the trig point which Judy located in the woodland. We set up there, the rain had fortunately stopped. Checking back in my logbook it had been four months - October 1st since my last SOTA activation on HF. This was in Scotland. Since then I had concentrated on activating summits in the Lake District, Welsh Borders and Wales on VHF with my friend Geoff 2E0NON, who lives down there. My operation on Staple Hill commenced on 2m FM and the summit was qualified with four contacts into Wales, and the south west. I moved to the 30m band using Morse and was inundated with callers. I completed the activation on the 20m band on CW and SSB, the furthest contact being to N1EU Barry, another SOTA chaser and activator who lives in New York. It was starting to rain so after 40 contacts I packed up the station - a Yaesu FT-857 running 50 watts powered by a 5 Amp LiPO battery. The antenna on HF was a link dipole cut for the 20m, 30m and 40m bands. I used a vertical dipole at 12 feet above ground on the 2m band.


As the way to the summit had been extremely boggy we decided to stick to forest tracks on the way back to the car and found a suitable way back to a gate at ST 232163 where there would have been room to park. The walk back took 15 minutes. I would choose to go that way if I revisit Staple Hill again. We had spent 70 minutes on the summit and it was now ten past five. We motored back to Taunton in the rain, turning back at one point due to a flood which the council were pumping out. The Holiday Inn Express was a good place to stay. There was a Harvester Pub called the Griffin by the side of the Holiday Inn. It was Saturday and very busy but we had a good meal there. The plan for Sunday was to activate two summits on our way down to Mullion in Cornwall where we were going to spend the next four days.
Posted by Phil G4OBK at 23:00