With a good weather forecast on 11th October 2020 I left Pickering at 6.00am en route to the East Ayrshire town of Muirkirk which is close to the two summits for the day.

It was exactly 200 miles to the parking place at NS685297 and I got there without having to stop. A really good drive on a sunny morning, minimum temperature 2c on the M74 in the shade and at the parking place near the metal gate by Forkings: 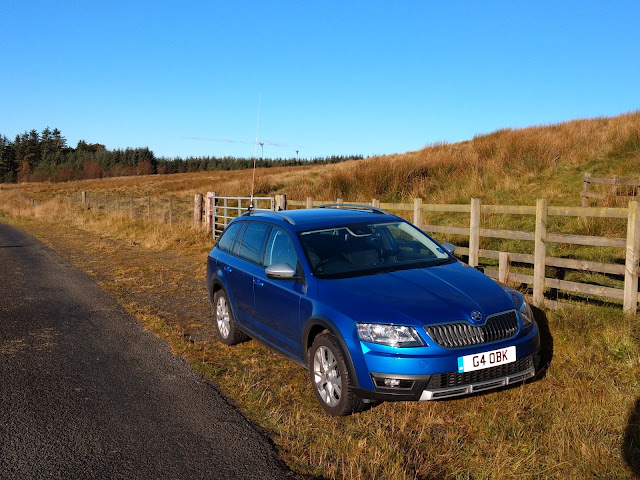 From here I followed the quad track - which veers off when near the summit. Quite a dry and steady walk up, not too steep with a few wet patches. It took me 24 minutes to reach the trig. As it was Sunday I expected plenty of chasers on 2m FM to be within range, and I wasn't dissapointed. After working regular chaser GM7NZI (Ray) I was called by MM7MMW/P (Michael) who was on SS-042 Shalloch on Minnoch - a very welcome S2S contact. 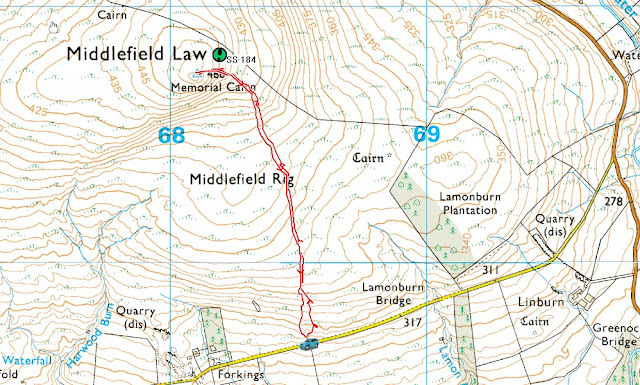 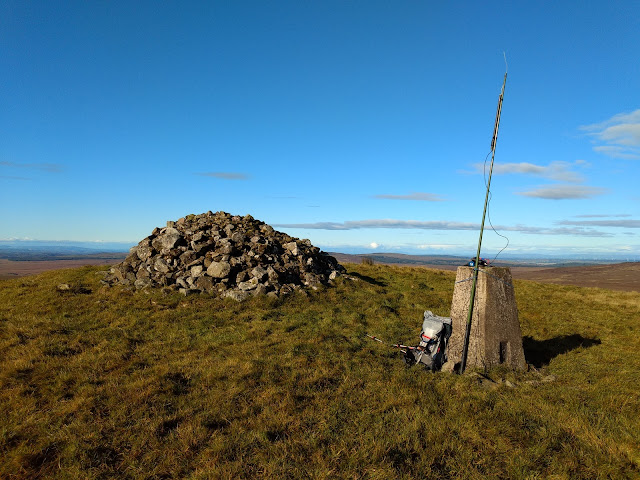 GM/SS-184 Middlefield Law
After eleven contacts on 2m FM in fifteen minutes I closed down and made my way back to the car.
SS-120 Cairn Table
As I parked the car on Furnace Lane on the opposite side of Muirkirk to Middlefield Law I heard MM0GOG/P (Duncan) calling CQ SOTA. He was strong so it was no surprise when he said he was on Cairn Table above me! I got my chaser points as GM4OBK/M and agreed that we would meet each other on my way up. It was time for an early lunch, so I had that in the car to save carrying it up to the summit. Whilst eating I heard Duncan working Pete MM0HQO/P on Green Hill SS-123 near Wanlockhead. Pete lives very close to me in Pickering, unfortunately as I was in the valley I couldn't hear him. The walkers car park was full but there is plenty of roadside parking in Furnace Lane across from the Muirkirk Golf Clubhouse - and the lane leads into a path up the hill there where I saw this sign: 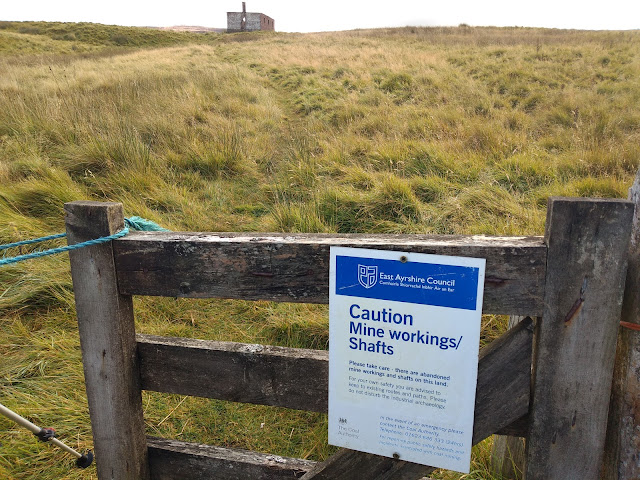 I'm unsure what was mined above Furnace Lane, but its worked out now and what is left is derelict. However the remains of the building seen above still sports part of a chimney, so I guess this may have been the furnace from which the lane and industrial estate below took its name.  This side path soon joined the main muddy "tourist route" up to the summit which was boggy despite the council having installed duck boards, several of which had sunk into the mire!  I wouldn't recommend this route up to Cairn Table - the way I came down was far drier ground with no deviations around the mud necessary, unlike on the way up. You may download the GPX track for this and Middlefield Law from the SMP:
©Crown copyright 2020 Ordnance Survey Media 010/20: 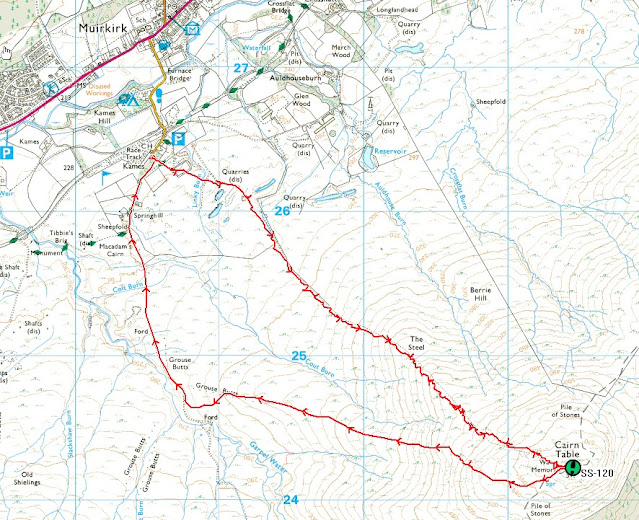 I was passed by a few younger walkers as my pace is not what it was a few years ago. Approaching the summit I met MM0GOG (Duncan) for the first time, on his way down. Duncan  told me he had enjoyed a fruitful activation which included several 4m (70 MHz) contacts. I reached the summit in exactly 83 minutes to find plenty of places to fix my aerial pole to. I went away from the large cairn and trig to another large pile of stones where a low shelter had been built - enough to keep the wind off the bottom half at least, and no one came across to disturb the proceedings. There were plenty of stations on the 2m FM band, with the Scottish Microwavers out using 13cm. They also carry 2m gear and so in my log appeared several, thanks to Andy, Jack and Jim, and also to Tim G4YBU on G/NP-005 Ingleborough: 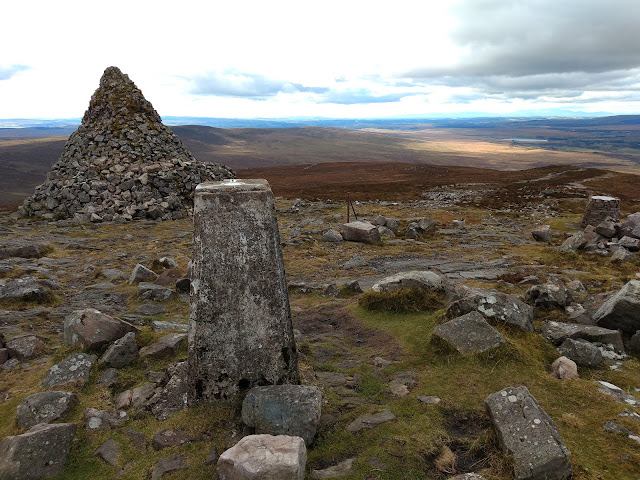 The Cairn Table itself and trig point 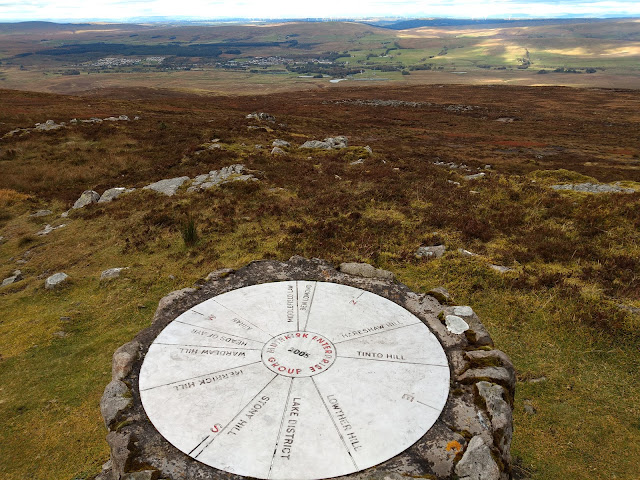 Topograph on summit with Middlefield Law SS-184 in the centre of the picture
The descent back to the car took me 70 minutes and was much drier than the ascent.
So to the drive home and calls at my favourite stop offs for diesel at Tesco (A69) Carlisle and the KFC Penrith for takeaway.  I was back home in Pickering just before 8.00pm. The KFC chicken was dissapointing today though - terribly dry and the coating had little flavour. I hope this doesn't mean that Colonel Sanders "11 herbs and spices" recipe has permanently changed....
Looking forward to activating another two unique Scottish summits as soon as I get the chance....
Posted by Phil G4OBK at 23:59