SOTA Cycling - is it worthwhile?

In this blog report I will try to analysis if SOTA Cycling is really worth it....

After leaving the track to Calkin Rig the nearest town to which is Langholm, I motored over to Newcastleton which is the nearest significant settlement to SOTA GM/SS-161 Larriston Fells. The plan was to park at the end of the track at NY 529921 near Dinlabyre and then cycle up the Scottish side on a forest track to within 1 Km of the summit trig point on Larriston Fells. From the radio mast I would then walk.

When I reached Hermitage Bridge, 3 miles from Dinlabyre there was a road closure due to resurfacing work: 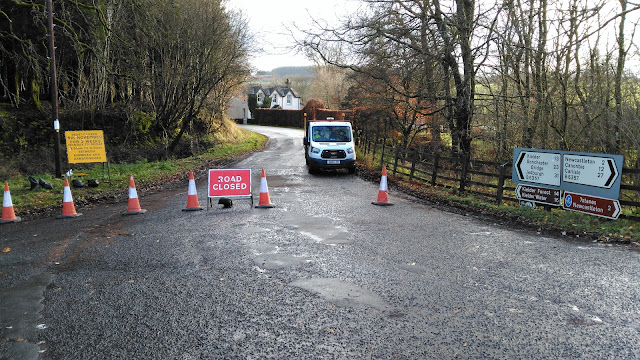 An approach to the road worker sat in his van stopping traffic worked, and I was allowed to drive as far as where the road was being resurfaced. I was able to get my car off the road there and ride the rest of the way on the bike to Dinlabyre and onto to the summit track.  Here is my route:

Progress riding the bike was slow once I left the main road, and on a significant part of the steeper uphill stretches I was forced to push. I'm apparently not so fit now as I was a year or two ago.... When I reached the radio mast and comms cabin where the track ended, I laid the bike down, locked it and proceeded to the trig point on foot. The mast is not within the activation zone. 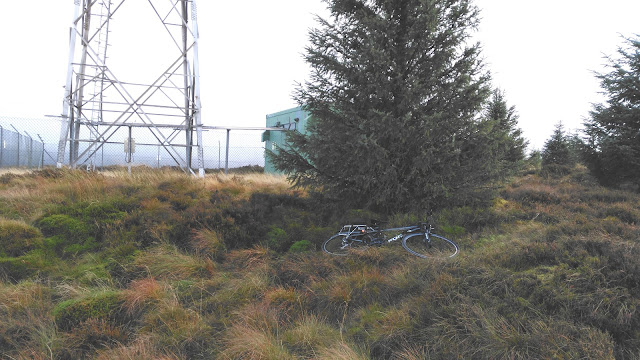 There was no trace of any path (a dotted line is shown on the map but was not apparent on the ground) and it was difficult making progress on the rough and boggy moor. Not a route I would recommend, I certainly would not return here again. The day was becoming damp with thick mist forming and I was uncomfortable after putting my leg in a hole full of water on the walk back from Calkin Rig in the morning. I knew when I reached the summit I did not want to stay longer than necessary..... the going on the tussocks was so difficult to be honest, I may have been better setting up at the fence around NY 564917 which was within the 25m drop zone, however when I got there I was thankful of the trig for shelter from the bitter wind and also the shelf beside it which was dry for sitting on and the right height for bending forward and sending the Morse.  There was good coverage at Larriston on the Vodafone network so I was able to spot myself using SOTA Spotter. I only operated on the 40m band on Larriston, cutting my operating time down to 20 minutes due to the failing light and the cold. I heard Don G0RQL in Devon give me a courtesy call at the end of my brief 40m SSB session, Don was 5 & 4 but the lack of power at my end - 10 watts from a KX2, meant there was no chance of a 2 way QSO unfortunately... the only UK station actually worked was the CW QRS operator David G0FVH: 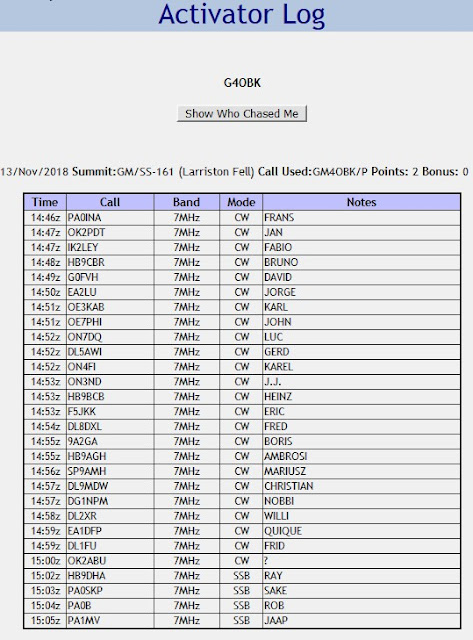 Relying on my GPS for direction, I headed back to the radio mast which had disappeared into the mist, relishing the thought of the quick ride back down the hill and the clean dry pair of socks waiting for me back at the car! As I made my way back I fell forward at one stage whilst negotiating a peat hag, no injury fortunately for me, just a moan and a groan as I continued on my way! If I had been using my normal walking poles I wouldn't have fallen like that.

I hardly peddled on my way down, reaching speeds of around 30 MPH on the rough track, It was a little foolhardy really as I wasn't wearing a helmet.  I reached the car just after 4.00 pm and the road had re-opened to traffic. It took me just 4 hours to drive home, which included a fast food refuelling stop at the KFC near the M6 roundabout at Penrith.

Going back to my heading on this blog - was cycling to the summit worthwhile - in terms of the time saved?

Before I rode back down the hill I had to ride around this concrete perimeter track:

https://www.geograph.org.uk/photo/453337 and I am not the only one to wonder why this concrete circle was laid on a desolate near the Lothians & Borders Police radio mast - does anyone know?

So what time did I save by riding and walking to this summit? At my normal walking pace on the track I estimate the total distance of 3.9 miles would have taken me 75 minutes walking time on the track and the same 28 minutes on the moor - so by using the bike I saved myself just 7 minutes on the upward journey.

However, the return is different. On the downhill run at my normal walk pace I estimate it would have taken me 65 minutes walking time plus the same 26 minutes to negotiate the moor on foot.  So by using the bike on the return journey I saved myself another 45 minutes.

So to sum up I reckon on this summit I saved myself around 1 hour by cycling Larriston Fell, however there are drawbacks - I needed to clean the bike the next day, as well as my rucksack which was mud splattered from the fast downward run. The other drawback is that when cycling on tracks, particularly at the easily reached speeds achieved (in excess of 25 mph) when riding downhill you are more at risk of an accident.  Other drawbacks are the fuel consumption on my car on what was a 320 mile journey with the bike on the carrier at the back causing drag. This means my diesel estate car only achieves around 45 mpg, when without the bike on the back I would likely get around 50 mpg.  I was unable to carry my walking poles on the bike - they would have been useful walking on the rough moor and would have likely prevented my falling into the murk - so another drawback there. The final drawback as I see it, is that when riding the bike it was not practical to wear my knee length walking gaiters - these are essential when walking on the type of rough wet moorland on border summits like Larriston Fell. Yes, I could have bagged the gaiters up and carried them in the rucksack and donned them before the moorland section, but I never the realised how rough and wet that moor would be....

So with hindsight, I have concluded for the purpose of saving just one hour in time I should have left the bike at home and walked the whole distance to the summit of Larriston Fell.  Walking the whole way would have meant I would have arrived back home at 9.00 pm rather than 8.00 pm. In terms of physical energy used, I have concluded there would not have been much difference in the effort expounded, whether walking the whole distance or cycling and walking the remaining distance across the moor.
Posted by Phil G4OBK at 11:59