It was the Wednesday before the Friedrichshafen Ham Radio Convention. Our hotel in Obernheim started breakfast at 6.30 am and we were on our way to Lemberg DM/BW-038 just after 7.00 am.

This was another wooded summit just north of Gosheim with a large tower and picnic area. We parked under some trees and it took just 12 minutes to reach a clearing on the 10 point summit. The clearing was impressive, especially the tower, wooden building providing shelter, and benches and picnic tables.

Nick set up his station initially on a bench and after a period of operation using his dipole he moved position and set up on a picnic table with his loaded vertical antenna on a tripod. I set up about 50m away from Nick on a bench using my 6m long "Life's a Breeze" pole and link dipole. Once again we had no problem with interaction which was quite surprising, as we were both running 30 watts output on 20m, 30m and 40m.

With five more summits planned in the day we completed just over 50 contacts between us before heading off back down the hill.

My maps showed an airfield on the top of a 1002m high hill which had been activated on over 80 occasions. This was one of local ham Klaus's (DF2GN) favourite summits.  We were fortunate to meet Klaus later in the day when he came out looking for us. The airfield turned out to be owned by a glider club, but there was no flying whilst we were there midweek. A good track took us by car right on to the summit which had a fantastic shear drop take off for 180 degrees from SSW round to NNE.  We tossed a coin and I got the bench, whilst Nick set up around 200m away from me.

After 77 QSOs between us we packed up and moved off to the next place. As we neared the bottom of the hill in the car we noticed a big gun DXers QTH, whoever lives there has got some very nice HF antennas and a  SOTA summit right on his doorstep: 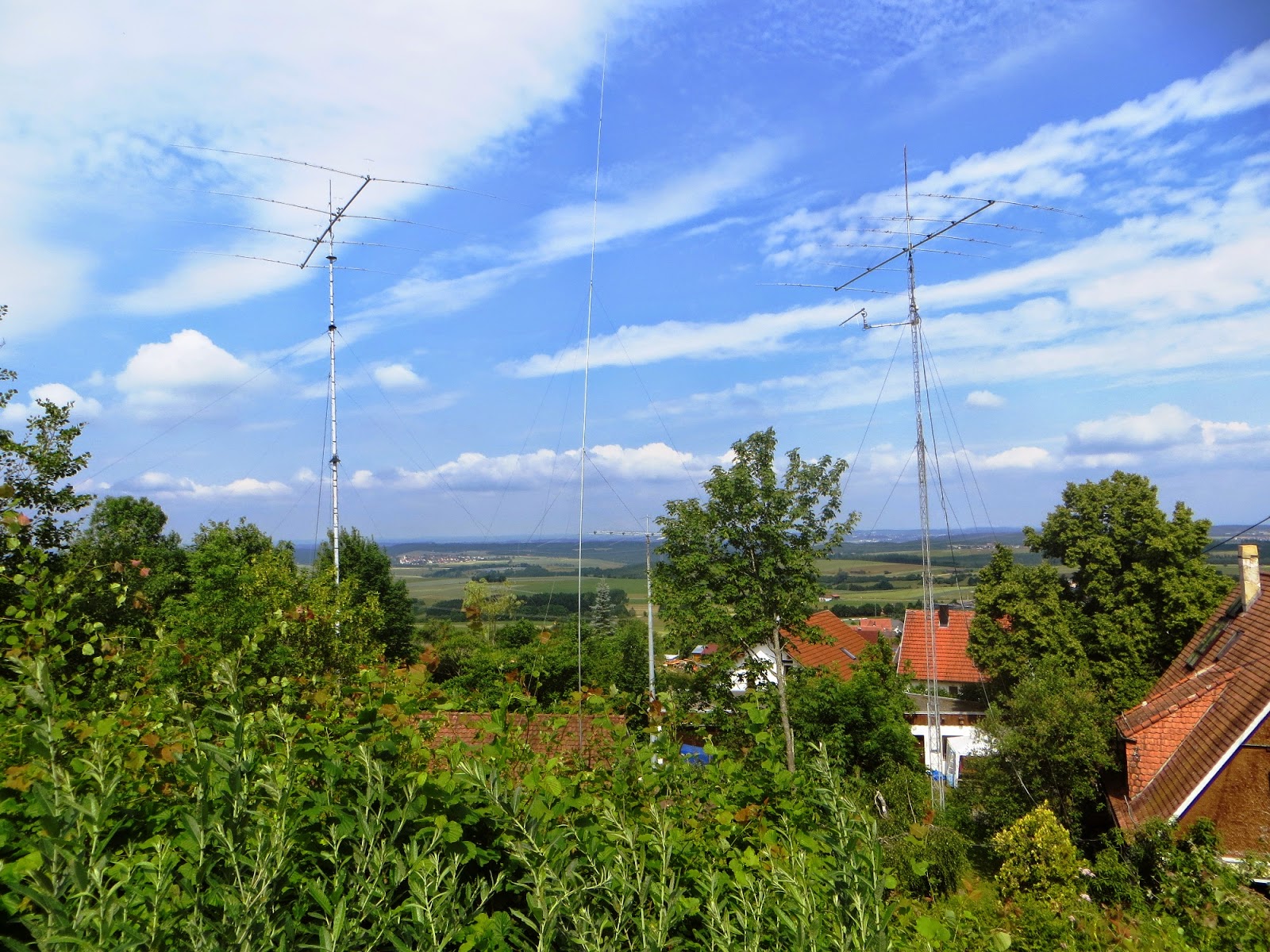 Yet another wooded summit and I was satisfied we found the top contour at the end of a maze of tracks by using Open Street Map. 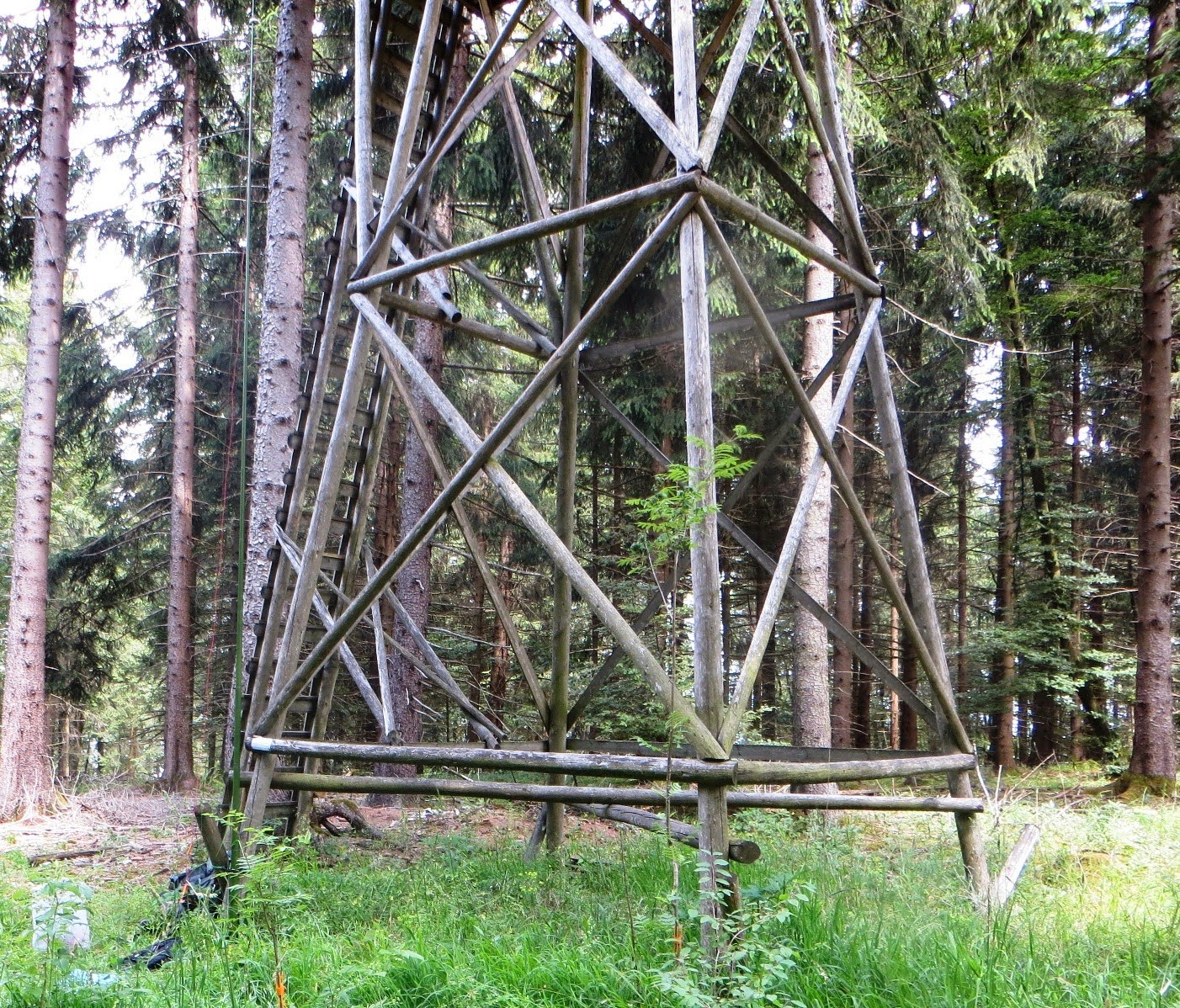 A wooden watchtower was situated here 100m from where Nick parked his car. In the picture below you can just see Nick setting up at the side of the track. The photo was taken from the base of the watchtower where I set my station up. 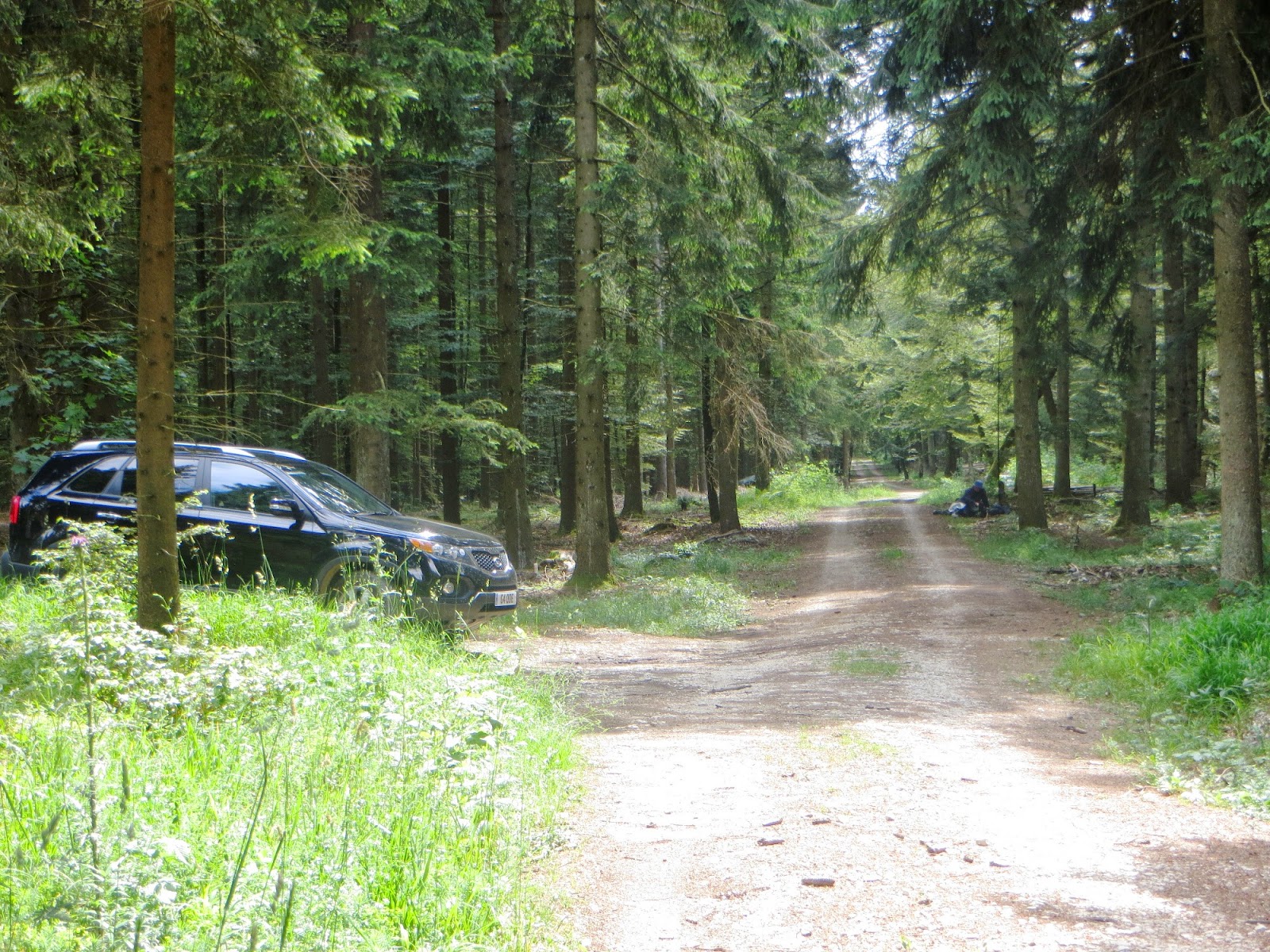 We were on our own in the forest for the hour and completed 69 contacts. Next stop was Hohenkarpfen DM/BW-074, which is another of Klaus's favourite summits.

This summit proved to be one of the most prominent and beautiful places we visited on our tour. The parking area is just before a restaurant and a footpath climbs to the summit - the time to reach the 912m high ten point summit was less than 15 minutes...there aren't many one point summits as easy in the UK I have to say and for this easy walk we got another 10 points, I'm not complaining - SOTA was never meant to be a level playing field once it became international.

The was once a large castle on Hohenkarpfen, and you can see that the ground has been worked. Now there is a painting mounted on a tree on the summit itself to remind us how it looked. The name plate also shows the height of the summit: 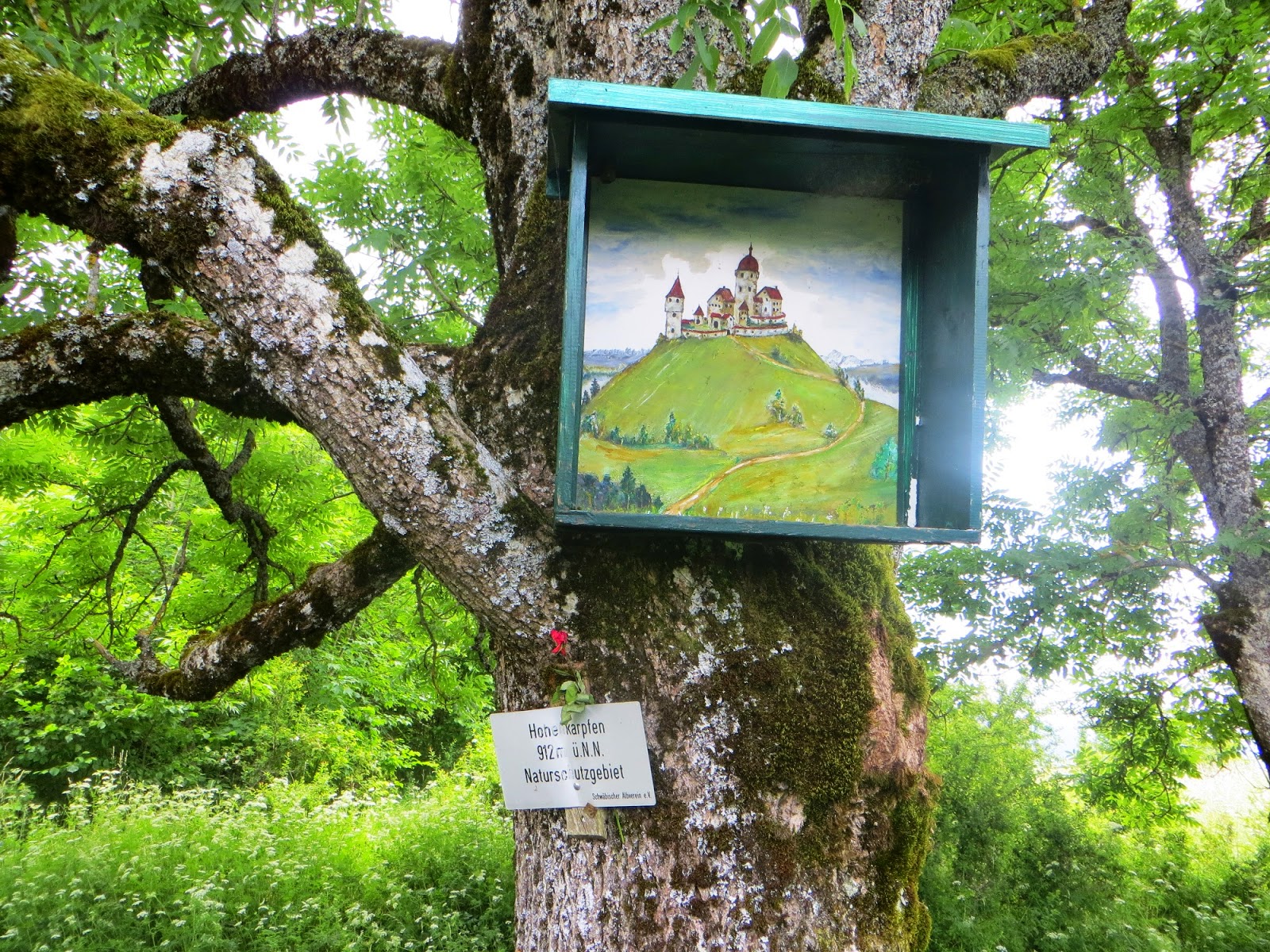 We set our stations up around 100m apart with Nick covering the 40m band and me on 30m and 20m. Our combined total was 66 QSOs. The strongest station which we both worked was Klaus DF2GN/M and we had seen him, unknowingly as we drove past, in a lay-by about one mile from Hohenkarpfen car park. This was a chap setting up a vertical antenna on a tripod on the roof of his car - and this had been Klaus...

The activation completed we walked back down to the car to be greeted by the man himself - Klaus DF2GN who had purposely driven to the car park after his contacts with us from close range. It's not the first time this has happened to me. I was once met by Geoff G6MZX on G/NP-028 Rombald's Moor. The same thing happened last year in the car park for Moel Famau GW/NW-044 when Karen 2E0XYL turned up.

After a lengthy chat to Klaus about LiFEPo batteries we set off for our fourth summit of the day - this was "Klaus's shack" and the main summit from which he had conducted many of his antenna experiments - Lupfen DM/BW-057.

After following Klaus DF2GN to the car park below Lupfen (near to the town of Talheim) we set out for the summit, a walk which took just 12 minutes. I had seen a picture of the large wooden clad structure on the top before.

The structure on Lupfen is in fact a tall tower with enclosed sides and a door. Inside there was a table and benches, so it would be possible to activate the summit in any kind of weather, and this is what Klaus has done several times in the past in the depths of winter.  With some people sat in the prime operating spot on the summit we were a little pushed to seperate our two stations, however Klaus approached them and they said they did not object to me setting up my gear close to where they were sitting. Nick moved around to the back of the tower and set up his station there.

Thinking back I regret not climbing to the top of the tower, but then there were other things on this trip that I regretted not doing... Activating summits was the priority over everything else and that came first, and we had another summit to do some distance away before we returned to Obernheim, so as we got into the late afternoon time was short. All three of us operated on HF before heading back down the hill.

After some very useful advice from Klaus we opted to make DM/BW-156 Lindenberg - our 6th and final summit of the day. We bid our farewells and were really pleased that Klaus was able to accompany us up Lupfen as he was recovering from a recent sports injury.

This summit was on a plateau and we drove into the activation zone again on forestry tracks north of Ippingen. Our operation took place inside the top contour between a wood and a field which had been recently cut for sileage...there lies a tale. Nick set up his station with the antenna running alongside the wood, I set up my dipole antenna with one leg into the cut sileage field and the other into the wood.

Nick was well away from my chosen position and making lots of contacts on 40m. I was on 30m but conditions weren't so good. Suddenly I heard the sound of a tractor and realised that the tractor man was about to drive into one side of my dipole antenna as he turned over his silage crop... in a panic I whipped the fishing pole down and tore at one side of my dipole, breaking it yes, but more importantly, removing it from the path of the tractor. I then had the time to snap a quick photograph.
The driver waved and smiled and continued on his way turning his crop!

I repaired my antenna and managed another four contacts on 20m (one with N7UN which pleased me) before packing up. Between us we managed to complete 62 contacts.

With an absence of shops and garages on our route all day we had survived on a couple of energy bars and apples. On our way back to Obernheim we came across the Rose Pizzeria by a railway crossing in a town of which I cannot recall the name, and enjoyed an excellent Italian meal there on our way back. Sixty points in the bag - a lot of driving and not so much walking.
Posted by Phil G4OBK at 15:39