The sun was shining as I left my driveway at 6.40am local time to drive to the village of Commondale - a start point for what is usually the walk up to Gisborough Moor G/TW-003, today was different, I was cycling and started off on the C Class road which goes over to Kildale.

G/ TW-003 summit is on a grouse moor which is policed by a fastidious gamekeeper, who I have met a few times. Today I was fortunate, I did not meet him - I was riding my mountain bike and I know he does not like the public cycling on the tracks that run over the moor. These rough tracks are just about suitable for land rovers and quad bikes. They are public footpaths, but not bridleways. The moor is access land.

I started my 2.8 mile ride up to the summit at 7.25am and was on the summit at the activation point 30 minutes later. I had to push my bike for about 200m after leaving the road when I became short of breath.

I was carrying a lot more equipment to the summit than I usually do when walking. A 7 AH LiFePo battery, a 4.2 AH LiFePo4 battery, a small steel operating platten, a 50 watt VHF FT-1500M mobile radio, an Elecraft KX2 QRP HF radio, A 2m vertical dipole, an HF link dipole for 20/30/40m, a 5m travel pole and the usual extras like logbook, pencils, swiss army knife, rope and bungees. Some of the weightier things went into my saddlebag. The rest on my back in my rucksack. My arrival at the summit: 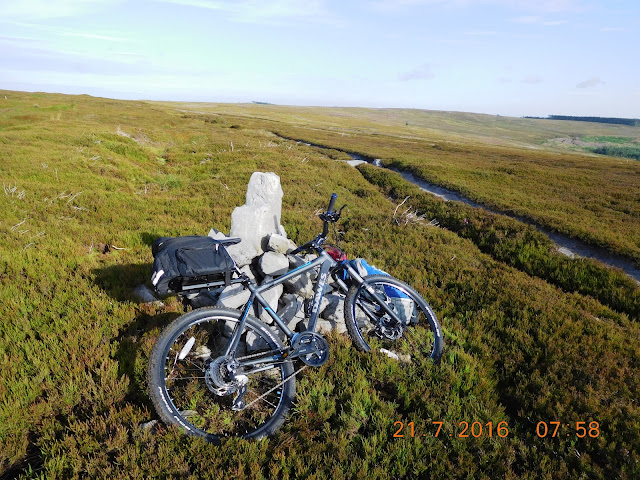 I set up on the 40m band CW to start with and GU3TUX was the first station logged on 7033 KHz. A few minutes later I was called by S2S specialist Juerg HB9BIN/P who was on Biet, HB/SZ-016, a 6 point summit. 40m was the best band for me today. After 19 QSOs on CW I made 5 contacts on SSB. 20m and 30m were dissapointing with a total of 7 QSOs on those bands altogether. I finished off on 2m FM with just 4 more contacts - it is much harder to make a large number of contacts on 2m FM in England during the week. Last Saturday on G/TW-001 (the nearest summit to TW-003) I made 22 QSOs on 2m FM, albeit that is a better site for VHF working... 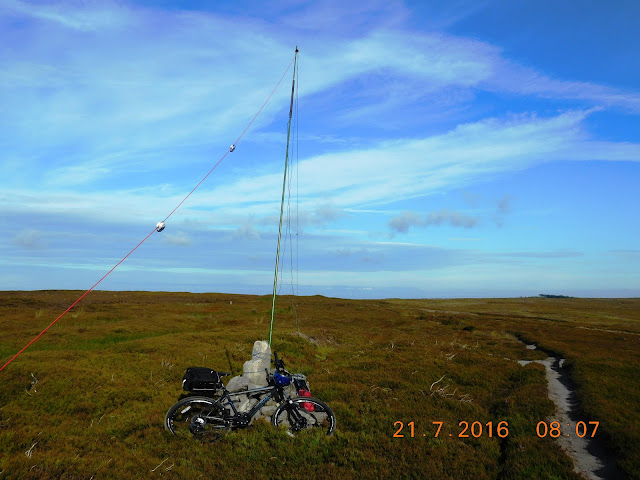 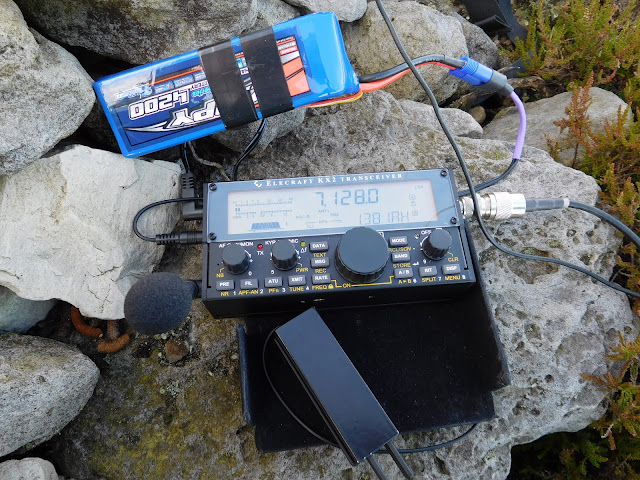 After an energy bar and a drink it was time to pack up and head off back down the hill. I used the same route back as I believed that going that way I would avoid the gamekeeper, and I did. I never saw a soul at any time. Here I am about to depart the summit to ride back to my car: 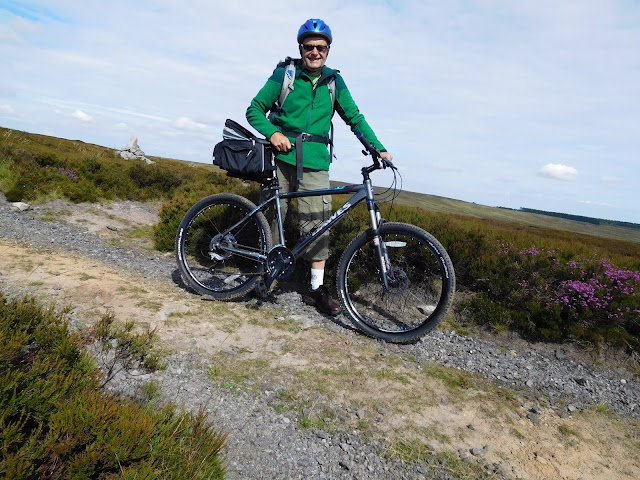 Postscript added October 2016: The Dawes Mountain Bike has now been sold. I will be using a Focus "Hybrid" bike from now on, which is my normal knockabout shopping bike, quite adequate for forestry tracks and the like. I don't intend riding on terrain rougher than that in the future.
Posted by Phil G4OBK at 05:00