After visiting all the Marilyn Summits in Cumbria and the North Pennines and activating them for Summits On The Air (SOTA) it was time to turn my attention back to the Scottish Borders where there are 8 summits.  I had only visited two previously, Ros Hill in 2005 and Shillhope Law in February 2013 both with my XYL Judy.  I decided that with a free weekend and after a dry period, that I would dedicate a long weekend to the English side of the Scottish Border. My friend Nick G4OOE was very interested in activating the border summits and offered to do the driving. I purposely chose these two summits, as with the SOTA International Cycling Weekend starting the next day my plan was to return with my bike and activate the last four summits over two days using my bike as the method of transport. See next blog. I was also accompanied on this trip by my Border Lakeland Terrier Treacle, back in her homeland!


We left Pickering at 5.30am arriving at Langleeford (NT 954225) in the Harthope Valley three hours later.  The public road down the valley is quite rough and potholed and is very steep in places. This map shows the walking route via Scald Hill that we took on the day:


The walk to the summit trig point over a distance of 3.3 miles took 1 hour and 40 minutes. I was quite pleased with that and with the weather having been so dry for two weeks we had no problem crossing several dried up bogs. Once the ladder style was reached and crossed at NT 9142 2068 we were on the plateau at 805m with the summit only 10m higher than this. The path was then flagged to the trig point and beyond.


We were soon on the air taking turns on VHF (5 watts) and HF CW (50 watts). Conditions weren't at their best and I failed to make any voice contacts on HF. Morse was much more productive. 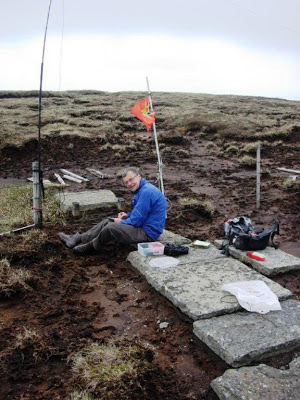 We completed summit to summit contacts with HB9BCB/P in Switzerland and with S52CU/P in Slovenia. This is me operating pictured right - the SOTA flag was flying.   Visibility was poor, the sun did not reappear until we were back down in the valley.

A few walkers starting appearing and we had to field the usual questions - once again Joe Public confused ham radio with CB which seems to be better known.  We posed for a photograph at the trig point before heading towards the Pennine Way main route at Scotsman's Cairn. The leg to The Cheviot from the Pennine Way is a spur and not all Pennine Way walkers visit the summit.

Once we reached Scotsman Cairn it was time to take our jackets off as the sun came out.

The route to the cairn and then down the hill to Scotsman's Knowe was fine, however from that point on right through to the sheep pens at Langleeford Hope the route was difficult. This involved crossing the burn around 20 times over 2.5 miles. I wouldn't go that way again. It would have been better to stay high and walk over Comb Fell and Hedghope Hill. That route would have brought us straight back down to the car park.


We arrived back at the car park just before 3.00pm for refreshments before going heading to our next summit Housedon Hill G/SB-010, north of Wooler.